Gracefulness of mortuaries restored and shown

Mortuaries, or relics connected with the deceased, need not be necessarily morbid or dark – they can be very decorative and bear a lot of information, as an exhibition of SNM shows. 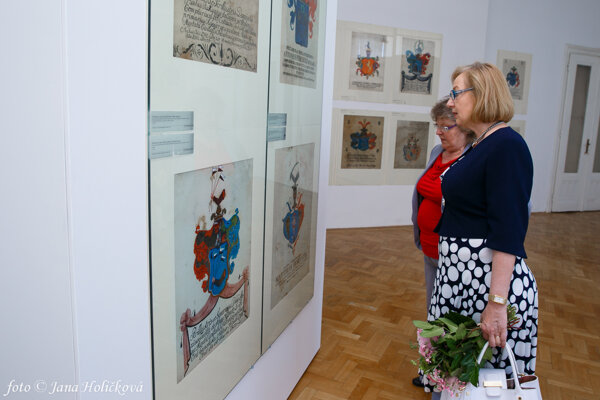 The Restored Gracefulness of Mortuaries is a unique collection whose fundaments were given by the noble family from Radvaň, near Banská Bystrica, called Radvanskýs. At their mansion, they had a room named after Rakoczi, and there, they started to collect items that could be likened to modern death notices, only much more decorative and posh. They managed to bring together almost 200 of them, one of the curators of the exhibition (first shown in the Central-Slovak Museum, SSM), Filip Glocko, said. “They were something like the first museologists,” he added.

The unique collection comprises items mostly from the 18th to 20th centuries. The Latin word mortuary was more widely used for items associated with funerals and burial sites; in a more specific sense, this means relics that include a coat of arms and the signature of the deceased. They were put on the coffins of dead nobles, and some were sent to the fellow nobility to announce the death. Still others were kept in churches. Silk and – less durable – paper mortuaries were originally collected in churches and family archives; in the course of the 20th century, though, they gradually became parts of state archives and museum deposits.

Thus, this exhibition in the main building of the Slovak National Museum (SNM) on the Vajanského nábrežie embankment in Bratislava, is rather an exception, and unique especially regarding its extent.

Apart from the Radvanský collection, another – smaller – part stems from the Evangelical churches in Banská Bystrica and Hronsek where they were originally shown. Some were bought by the SSM head during communism. Only the smallest part of these “two-dimensional artworks” is of unknown origin.

The sheer number of mortuaries inspires – not to mention artistic and biographical facts – some historical or art-historical curiosities. For example, the symbol of the last member of a family who was childless was represented upside down after his or her death, to show the unfortunate position. It is also interesting to follow the development of trends in depicting and using coats of arms of women. The funeral coats of arms of females are represented by less than a third (56 pieces) but this includes 23 so-called alliance coats of arms: next to her family symbols, the coat of arms of her husband was depicted. However, children most often just used the symbol of their father’s family.

The richness and the material used reveal, to a certain extent, the position and the wealth of those deceased. The youngest dead nobleman to receive a mortuary was five years old; the oldest almost one hundred. The number of families whose coats of arms are painted on mortuaries exceed 140.

The materials used – paper or silk – are fragile and not lasting for long and so the very fact that the collection has been preserved is rare. These mortuaries saw their high-time at the end of 17th and in 18th centuries. 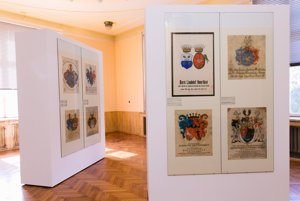 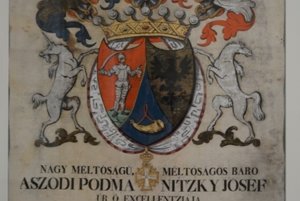 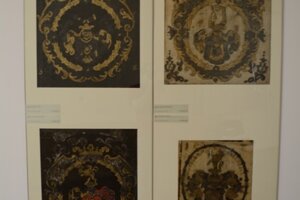 Mortuaries from the territory of today’s Slovakia are marked, according to co-curator Martina Hrdinová, by vivid colours and bright motifs not evoking too much their sad mission, especially when compared to Austrian or Croatian ones (which are represented by one copy at the exhibition).

Unlike modern death notices, the mortuaries were rather recountings of the lives of the nobles and celebrating them; although at the end of their lives, Glocko noted.

The third curator of the exhibition that can be seen daily except for Mondays until September 11 is Roman Hradecký, with artworks restored by Štefan Kocka.