Lajčák shared his vision on future functioning of the UN

The Slovak Foreign Affairs Minister running for the post of the UN Secretary-General answered detailed questions of UN Security Council members on his objectives and ideas. 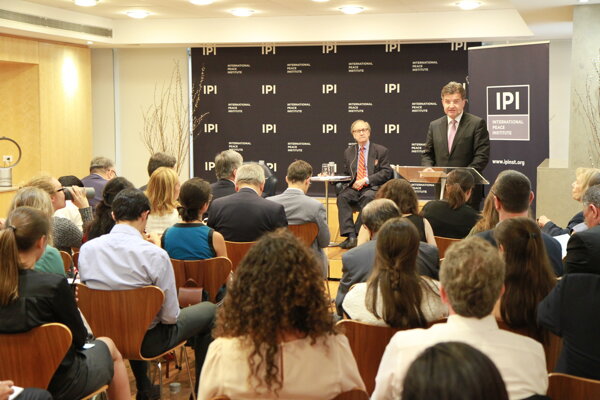 “The UN is a pillar of effective multilateralism,” said Foreign Affairs Minister Miroslav Lajčák on July 14 as cited in the press release of the ministry. “I would like to see that this is an efficient, dynamic and reliable organization, respected and trusted by the states.”

During his two-day working visit to New York, Lajčák spoke at several forums and during a series of bilateral talks about his vision on the future functioning of the UN as well as the Slovak Presidency of the Council of the European Union.

As part of his candidacy for the UN Secretary-General, Minister Lajčák met with the UN Security Council members and answered their detailed questions on his objectives and ideas in individual areas of the UN activities.

At the UN headquarters, Minister Lajčák also gave an address before Ambassadors of the G-77 countries, the biggest grouping of developing countries in the United Nations bringing together 134 countries, and discussed the UN role in realising development goals with them.

He comprehensively tackled the issue of the UN and its new Secretary-General in the discussion at the International Peace Institute (IPI) before the expert audience consisting of diplomats, analysts, journalists and specialists of the non-governmental sector.

“In my opinion, the UN system has everything necessary available: institutions, guidelines, expertise, capacities and human resources,” said Lajčák. “However, this system is not particularly designed for today’s changes and challenges. Therefore, it’s necessary to identify how the UN could do things better in using the existing instruments and processes more efficiently.”