A Great-Hungarian army officer Gyula Hembach sketched the views from his hotel room in Tatranská Lomnica in the High Tatras, and the surrounding vistas. 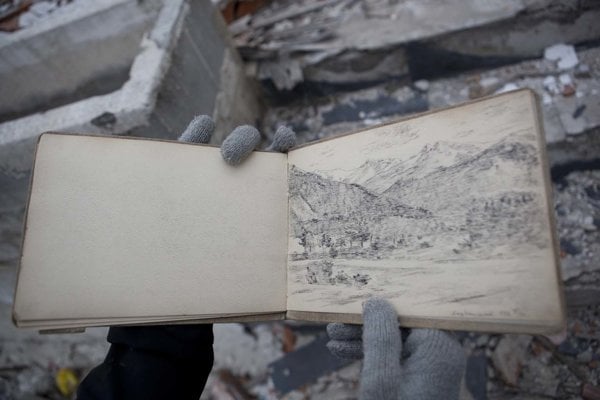 Juraj Gábor and his page from the sketch-book (Source: Courtesy of Banská St a nica)
Font size:A-|A+33

A hundred years later, Slovak visual artist Svätopluk Mikyta found his sketch book, rich with illustrations, in a second-hand bookshop in Banská Štiavnica; it inspired him to create a new project called Tatrahundert. “However the project did not appear from one day to another; I have been considering it for a long time, from various angles,” Mikyta said for the SITA newswire, “and finally, I decided last year for the form of reconstruction of the sites of his stays with a group of artists I invited to cooperate.” He added that they aimed at reconstructing precisely the start points where original sketches were made, as well as sites of potential inspiration.

He planned for 14 contemporary artists to follow the steps of Hembach across the Tatra mountains day by day and to freely follow up with the old sketches and the visual basis of the officer’s works. The new artworks make up an exhibition that opened in the original hotel where Hembach stayed, now called Grandhotel Praha, the TASR newswire wrote. 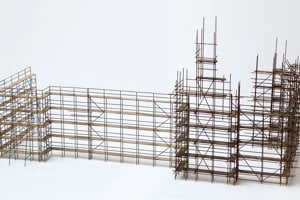 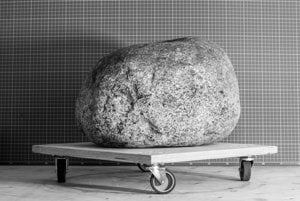 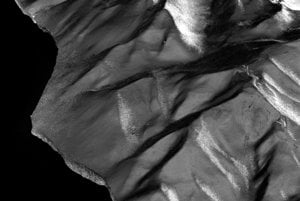 Of the Tatrahundert project (4 photos)

Hembach’s sketch-book got to the bookshop from an anonymous donation from Budapest; and there are only a few historical facts about Hembach. However, the watercolours and pen-and-ink drawings preserved reveal what the officer saw from his room No 217. The original sketch-book focuses on Tatra plain-air.

“Not just the motif, but also the artistic quality of the drawings captured my attention at first sight,” Mikyta said, as quoted by TASR. “It was obvious these are not amateur sketches but works of someone who is able to observe the reality and capture it, even on a small paper format. He also mastered perspective and the possibilities of using hatching in drawings.”

When studying the sketch-book later, Mikyta noticed the detailed dating of pages, as well as the site of his accommodation. A married couple from Tatranská Lomnica, the Bohušs, who are connoisseurs of the Tatras and mountains in general, helped artists identify sites from the centennial sketch-book. “As we are interested in the history of the Tatras, we helped identify locations,” Iveta Bohušová told SITA. “We know from art historians that in the past, many people were talented and skilled – thanks to well-developed fine motor abilities, they created authentic, even surprising, artworks. This ability compensated for them the lack of cameras.”

Skip to the present times

The artistic technique of contemporary artists was free, each used his or her usual methods, be it photography or drawing. However, they were selected due to their inclination for landscape in their creations. The exhibiting artists from central Europe include, according to the Sme daily, Jakub Roček, Jan Čumlivski, Svätopluk Mikyta, Štefan Papčo, Lucia Papčová, Luďek Rathovský, Nico Krebs, Michal Moravčík, Johana Pošová, Juraj Gábor, Dominika Jackuliaková, Rastislav Podoba, Tomáš Džadoň, Peter Puklus and Peter Krupa. Between February 8 and March 30, 1916 Hembach made a set of ten watercolours and 13 pen-and-ink drawings which were re-made by these artists.

“I created an online calendar in which every one of the artists marked the day they preferred, from the hundred-years-old sketch-book,” Mikyta explained. “Gradually, they arrived for residential stays on exactly the same days to the same locations in which Gyula Hembach drew, to get inspired for the new work.”

“Maybe our project Tatrahundert will inspire artists 100 years from now, and they will set out in the footsteps of our works from 2016,” Mikyta summed up for TASR. “The visitors will be able to discover from drawings for example the original Lomnica Hotel, view of Kežmarské Žľaby, Slavkovský štít, or Tatranské Matliare.”

The exhibition can be seen in Grandhotel Praha in Tatranská Lomnica until July 24, then it moves on to Brno and in spring 2017, to the Central-Slovak Gallery in Banská Bystrica.