The state should support the local food production with various subsidies or other methods that would broaden the offer. 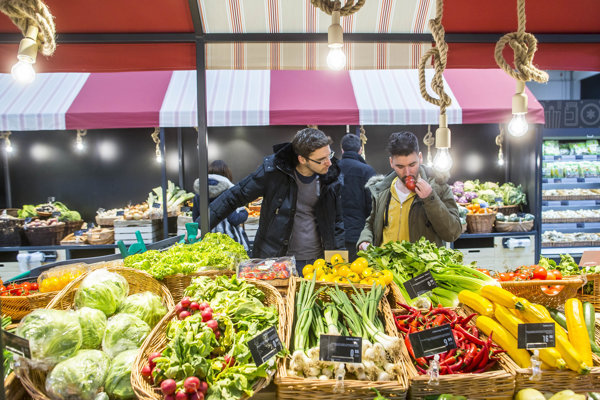 Food prices and other commodities were compared within EU. (Source: SME)
Font size:A-|A+

The share of foodstuffs produced in Slovakia offered in shops continues to drop, but not because of the lack of promotion. The state fails to support the food producers who were decimated especially during the rule of the first post-communist governments, observers say.

Two recent surveys carried out by GfK company showed that only about 39 percent of all products sold in shops are of Slovak origin. The number dropped compared with the 2014 survey, with one of the reasons being the low number of Slovak producers.

“Companies are unable to supply big retailers,” retail analyst Ľubomír Drahovský told The Slovak Spectator, adding that Slovak consumers are not very interested in domestic products as they are usually more expensive.

To change the current situation, the state should support the production with various subsidies or other methods that would broaden the offer. This problem cannot be solved immediately and it is necessary to prepare a longer-term strategy, the analyst added.

Yet the fact remains that customers have different priorities and they still prefer price over origin of purchased products, observers point out.

During recent years, the Agriculture Ministry has introduced several campaigns to support domestic production. It even defined what a “Slovak food product” is: a product with 75 percent of its raw-material components made in Slovakia, except for water, according to the regulation adopted in July 2013.

The producers, however, are not required to label their product with a mark confirming their Slovak origin. One of the reasons is that the EU provides only limited support to local food as its interest is to remove the borders and create one common market, the Hospodárske Noviny daily reported.

Moreover, the Slovak shops were required by law to display close to their entrances how much foodstuff of Slovak origin they sell. The Agriculture Ministry, however, informed in May 2016 that this duty will be scrapped following the note of the European Commission that the provision was at odds with EU legislation.

The EC claimed that the only solution it would accept was to remove the provisions from the law, which the ministry accepted though it does not identify with the objections, ministry spokeswoman Radka Kulaviaková told the TASR newswire back in May.

The publishing of lists will continue, though only on a voluntary basis, she added.

“The ministry considers the information on share of foodstuffs of Slovak origin from the point of revenues useful and having a certain explanatory power,” Kulaviaková continued.

Drahovský, however, considers the provision “one of the grandiose stupidities”. Moreover, in most cases the customers are not interested in the origin of products. They rather pick the products based on their price. They also check freshness and quality of the products. Other important factors are shopping habits and locality of the shops.

“The impact of the regional sentiment seems to be minimal,” Drahovský said.

The Agriculture Ministry meanwhile tries to increase the share of Slovak food in shops also via various educational and promotional campaigns, as well as via negotiations with the retailers established in Slovakia to sell more Slovak food, ministry spokeswoman Jana Gasperová said.

“The ministry also tries to persuade producers to create associations that would enable them to meet demands of retailers and increase their negotiating power,” Gasperová told The Slovak Spectator.

Drahovský points out that the domestic production in Slovakia has been decimated and can only be restored with difficulties.

The agriculture and food production was under strong political lobbying especially during the rule of the earlier governments, which resulted in many domestic producers being gradually eliminated. Some domestic production companies were sold to foreign owners, but they finally left and the production simply ceased to exist, the analyst continued.

Moreover, support for the food industry lags behind European standards. Slovakia meets requirements of Brussels without analysing the impacts they will have on the domestic sector and without proposing and implementing the strategies that would support the Slovak food industry, said Jarmila Halgašová, director of the Food Chamber of Slovakia.

“Combined with the approach of retailers we cannot expect the position of the food industry in Slovakia will improve,” Halgašová told The Slovak Spectator.

Though every government promises at its beginning it wants to support producers, every attempt has failed so far, opines Drahovský.

Even this government has stated some of its priorities in its programme manifesto. The Agriculture Ministry, for example, plans to prepare a new law on a marketing fund to support the promotion of Slovak agricultural products. Gasperová also points to the voluntary principle of labelling products of Slovak origin, whose aim is to support the sale and promotion of such products and their placement in the Slovak market.

Yet there is still a risk that the share of Slovak food in shops will continue decreasing, especially at the time the European market faces a surplus of food resulting from the Russian embargo, Drahovský said.

“Moreover, for Slovak consumers price is still a priority,” he added.

Responding to the March survey on the share of Slovak products sold in shops in which it scored poorer than some other shopping networks, retailer Kaufland ordered its own survey using slightly different methodology. The ordering parties however still differ in their opinions which of them offers more accurate numbers on who sells more domestic items.

The survey carried out by the GfK company for the Food Chamber of Slovakia (PKS) suggests that the most Slovak food in 2016 was sold in COOP Jednota and CBA shops, where the share of Slovak food on the total offer accounts for 60 and 54 percent, respectively. In Tesco Stores, only 43 percent of offered items are of Slovak origin, while in Billa it is 41 percent, in Metro 39 percent, in Kaufland 35 percent, and in Lidl 16 percent.

The Kaufland survey poses similar numbers when it comes to the share on all amounts. In absolute numbers, however, the results differ. Most Slovak products are sold by Tesco (5,315) and Kaufland (5,310), while COOP Jednota offers 1,453 and CBA 1,137 Slovak products.

“Foreign retailers, including Kaufland, are often accused of having low share of Slovak products in the offer and of not supporting domestic food production,” Kaufland spokesman Martin Gärtner told the July 14 press conference.

PKS, however, regards Kaufland’s survey as an effort to make excuses.

“People ask for more Slovak food in shops, and not skewing the numbers as we can witness in this case,” Jarmila Halgašová, director of PKS, told The Slovak Spectator. She considers the whole press conference at which the results of the survey were introduced a defence of its marketing campaign