Martin Pollack: I could not be silent

“Coping with the past has always been superficial in Austria” 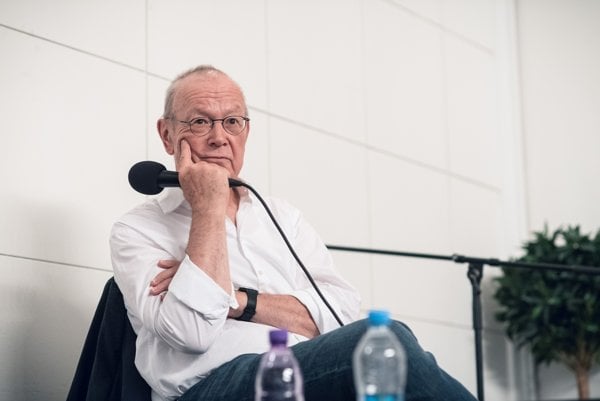 Accepting the fact that your father is a Nazi criminal is nearly impossible. Austrian writer Martin Pollack solved it by breaking up with his family, about which he often writes in his books. He presented one of them in Bratislava in early June.

In an interview with the Sme daily, Pollack also describes how he examines crucial moments in history through stories of people from eastern Europe.

SME: You did not have an idea what Slavonic Studies are, but you decided to study them anyway. Eastern Europe has become your destiny. How did it happen?
Martin Pollack (MP): I did it particularly to spite my grandmother. I was coming of age and started realising I was brought up by Nazis. My life was turned upside down. I understood more clearly that my idyllic childhood was only a mask, a terrible hypocrisy. In our family, silence ruled. The crimes committed by my father during World War II were taboo.

SME: Do you remember your first trip to Poland?
MP: Of course, because it was a breaking point. It was first of all an escape from my family. I did not have a clue about Polish culture as a young boy, but something subconscious dragged me to the east. It is strange. I learned about what my father did in Ukraine, Poland and Slovakia as commander of a special Nazi commando unit much later.

SME: Have your relatives responded to this interest?
MP: With displeasure, even aversion and big concerns. My grandfather and father as well as other family members were strongly convinced about German superiority. They considered Slavs a lower race. They wished for great Germany and were afraid of European cooperation and friendship. They lived in hatred for everything unfamiliar. They feared that I would bring a Polish or Jewish wife the most. That was the last straw.

SME: Parting with your own family must have been extremely hard. How did you cope?
MP: It was a gradual, extremely difficult and long process. In my family, Nazism was everywhere. I believe that one can really cope with the past only if it is truly honest, authentic, when a person confesses everything, hides, embellishes and omits nothing. I am convinced that if we tell the whole truth, it is possible to move forward, to understand what happened and not to repeat the same mistakes.

SME: You wrote a book “The Dead Man in the Bunker” about your father’s crimes. Was it also a long process?
MP: Very long, it took me decades to write about them. But I knew I have to speak loudly about what he did in Slovakia when suppressing the Slovak National Uprising. What he did in Donovaly or in Ružomberok. Coping with the past has always been superficial in Austria. Austrians tried to pose themselves as victims immediately after the war’s end and claimed that Germans had committed all the evil. I wanted to show, with the example of my own family, how it actually was. It has been a very painful experience for me. But I could not be silent. I refused the comfort of denial, suppression which I considered much worse. I would be lying too.

SME: You were not allowed to enter Poland for nine years as you were critical of the communist dictatorship and informed about the Solidarity movement. But you did not come to hate Polish culture and literature and you even became one of its most influential promoters. What did you find attractive in it?
MP: I befriended Ryszard Kapusćiński, whose work I admire, and I translated his best books into German. I gradually found many older and also contemporary Polish and Ukrainian writers. I found out that the West almost does not know eastern European cultures. I was strongly influenced by the Polish school of reportage founded around the Gazeta Wyborcza daily. I consider it a global phenomenon. I also like American creative non-fiction, at whose start was Truman Capote and his phenomenal novel “In Cold Blood”, but Poles are closer to me regarding both topics and style.

SME: With your book “Emperor of America” you reminded Austrians of the world of Galicia. How did you find it?
MP: I came to Galicia as I was forbidden to enter Poland. So I continued in my journey to the east, to where I was allowed to go. I discovered Bukovina and other areas which dropped out from Austrian cultural memory. Nobody had been talking about the former kingdom of Galicia for centuries, though we had once been one huge country. It pertained to the war, the atrocities that happened there were concealed. Austria rather looked away. I was fascinated by that territory and I realised that one big common topic 120 years ago and today is migration. It was a mixture of nations, languages and cultures which attracted me. It was the exact opposite of a nonsensical call for one nation and one leader.

SME: Do you still travel there?
MP: Yes and I also want to write about those places. It is a love for the whole life. I often remind Austrians of reading their own classical writers who came from there. They like to talk about Joseph Roth, but they actually do not know him well. They do not even read his “Radetzky March” precisely where many avoided topics like mass migration, which I later reminded of from Galicia’s history, can be found.

SME: In Austria, and also here, certain groups have a strange nostalgia for the allegedly “good old times of the monarchy”. But its eastern parts suffered from extreme poverty and the average life expectancy belonged to the lowest in Europe.
MP: Vienna treated Galicia literally as a colony. It was horrible. Almost nobody dealt with serious problems. So the desperate masses fled. The country could not even deal with the refugees. I picked real stories of people for my book, and I started in Slovakia, in Brutovce in Spiš region. I found period reports according to which Slovaks were considered uncivilised, maladjusted in the United States. Nearly all of them were illiterate. They were used as strikebreakers because they took any job. But many of them succeeded after initial hardship and became Americans.

SME: You know Slovakia well. The world could even see your photo of Alexander Dubček from the 1980s. How was it made?
MP: I wanted to do an interview with him very much, but the secret police tried to prevent it. They were afraid as Spiegel, for which I was working at the time, was a big magazine. We finally made a deal, but I could not come with a photographer. I did not know how to take photos, but luckily I managed to take this one. We were talking very openly; he accepted his fate of being in exile in his own country. He was not pretending anything. He worked in his garden wearing only a vest and he did not mind me depicting him in an ordinary human form. When I saw him one year later talking at the square, I knew he would not be a leader for the second time. He belonged to different era. His time had expired.

SME: What do you fear the most in the region these days?
MP: The far-left and far-right are uniting in a bizarre way; they have been united by hatred. Their common aim is to close the borders and return the individual countries. It is an absurd goal in a world which is so closely connected. And those having their own emigrants, like Hungary and Slovakia, are calling for it the most. My beloved Poland heads towards clerical fascism. I have recently written a story about it, which aroused resentment at top political levels. I was taken aback by the responses. I would not be surprised if they banned me from entering the country again.

The interview was published in the Sme daily on June 8, 2016.

Who is Martin Pollack?

Pollack was born in 1944 in Bad Hall, Upper Austria. He studied Slavonic Studies in Vienna and Warsaw. For years he has been working for Der Spiegel magazine.

Since the 1980s he has been intensively translating from Polish to German, especially books by Ryszard Kapuściński and contributed to his world fame. Since 1998 he has been a freelancer. In his non-fiction literature he deals with the Nazi history of his family and his country.

He studies emigration, disputed borders and forgotten minorities of the Austro-Hungarian Empire. He has received several awards for his work.