No Slovak citizens were among the victims of the shootings that took place in Munich in July 22. However, the lone shooter may have used a weapon originally coming from Slovakia. 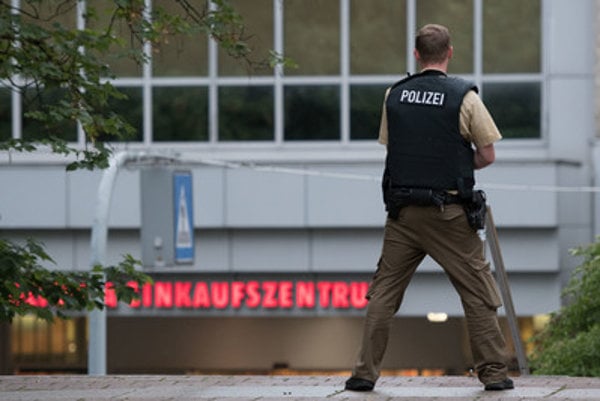 The shooting in munich, at a shopping centre. (Source: AP/TASR)
Font size:A-|A+

Ten people were killed during the shooting at the Olympia shopping centre in Munich, including the 18-year-old gunman, who had dual German and Iranian citizenship. He probably committed suicide. His body was found approximately one kilometre from the scene. In the attack, 35 more were injured.

Slovak President Andrej Kiska on July 23, sent a telegram of condolence to his German counterpart Joachim Gauck. He described the Munich shootings as an attack on common values and peaceful coexistence. “I deeply condemn this barbaric act," he wrote as quoted by the TASR newswire, adding that he was shaken by the gunman’s actions. “My thoughts at the moment are with those who became targets of the attack, their families, relatives, as well as all citizens of Germany,” wrote Kiska who expressed his deep sympathy and solidarity with German citizens and with people close to the victims.

On July 23rd, the Speaker of the Slovak Parliament, Andrej Danko sent a telegram of condolence to his German counterpart Norbert Lammert and to the head of the German Federal Council (Bundesrat) Stanislaw Tillich in response to the Munich shootings.

Slovak police want to intensify security measures in shopping centres, at railway and bus stations and at music festivals, said Interior Minister Robert Kaliňák and Police Corps President Tibor Gašpar following a meeting of the Council of the National Security Analysis Centre on July 23. “Our activities will be even more visible, but I believe it won’t be necessary to limit people's everyday lives,” said Kaliňák, adding that the highest security measures are still in effect in Slovakia. Security forces are now assessing plenty of information, and potential further measures will be adopted based on this. Kaliňák pointed to the fact that events linked to Slovakia's Presidency of the Council of the EU will take place in the country in the period ahead and that the police are also looking at security risks and analysing the situation in connection with the upcoming World Youth Days in Poland.

Police have intensified their patrols at railway and bus stations and at other places where people congregate after the first reports concerning the incident in Munich appeared, Gašpar said. He added that the Slovak police are ready to cooperate with their German and Austrian counterparts in collecting information on suspects if asked to do so.

The Slovak authorities have not yet registered any official request for cooperation from the German police in connection with tracing the origin of the weapon used by the Munich shooter to kill nine other people and himself, TASR learnt from Interior Ministry spokesman Petar Lazarov on July 24.

The Sme daily wrote on its website that the gun used by the attacker was from Slovakia. The daily was referring to information in the German newspaper Suddeutsche Zeitung. “If the German side asks us for help, we’re ready to provide immediate cooperation in the search,” Lazarov added.

According to the German police, the 18-year old David Ali Sonboly acted alone and was obsessed with information about shooting at schools and was also inspired by Breivik. He started preparing the attack at least a year ago. Nothing points to religious motives for the shooting. He acquired the gun illegally on the Internet.

The pistol, a Glock 17, was a former theatre weapon that had been restored and was capable of shooting live rounds. The Munich shooting spree was not the first one, in which a weapon from Slovakia was used, Sme wrote on July 25 in its print version. Weapons that were illegally modified to be capable of shooting were used, for example, in an attack on a Jewish store and the offices of the satirical magazine Charlie Hebdo in Paris in January 2015. Following the attacks, Slovakia rushed to change the legislation and made the sale of expansion weapons tougher, including the process of their deactivation.

Following the recent attack, Germany is demanding Europe-wide legislation that would unify these rules. Legal gun holders, however, argue that tougher laws will restrict them, too.