For Ireland the EU is a vital national interest

The EU UK negotiations will be important, but they must not become all consuming. A European Union that enables growth and is a force for peace in its region and the world will continue to be as important in the coming years as it has in the last sixty years. 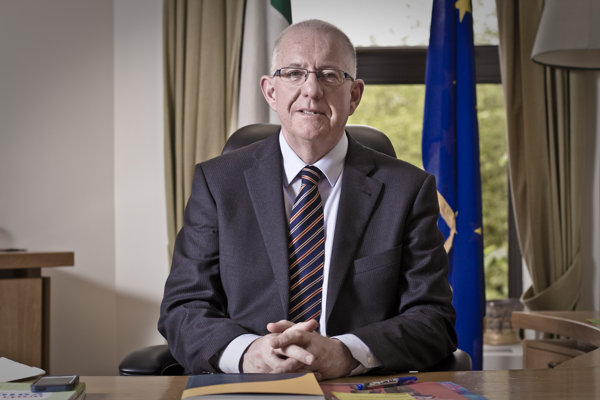 The Irish government, while disappointed by the result of the UK’s referendum, fully respects the decision of the British people.  We in Ireland, of course, see our future in the European Union.  The Irish public has consistently been amongst the most positive in its attitudes towards the European Union and with good reason.  The European Union has created the space for Ireland to develop economically and socially following more than a century of underdevelopment. Membership has given us access to the largest single market in the world and, more importantly, has given Ireland a real say in the rules that govern that market. Membership has allowed us to diversify our trade and build a modern knowledge based economy which provides employment for a better educated and more prosperous workforce.  It has also allowed us to influence the foreign policy of the EU and created space for the building of a more equal society.

There have, of course been difficulties for Ireland over the last forty years and European Union membership is no panacea. As we are not immune from the wider currents of the global economy, the European Union did not preclude us from experiencing the adverse effects of the recent economic crisis.  However, it is difficult to imagine how Ireland could have emerged so quickly from that crisis or could have reached its current levels of prosperity if it had not been part of the European Union.

In sum the continued progress and growth of the European Union, is, for Ireland, a vital national interest. Safeguarding this vital national interest will be central to our approach to the forthcoming negotiations between the European Union and the United Kingdom. There is a delicate balance to be struck. On the one hand, it is in the interests of all of the Member States that the UK should maintain the closest possible links to the EU. Our prosperity is tied to theirs and the belief of the British public that the EU has dealt with the UK in an open and fair manner will create a cornerstone for good relations in the future. On the other hand, any agreement on the UK’s future relations with the EU should be based on a balance of rights and obligations.

Ireland, as part of the overall EU negotiating team, will play an active role in defining the EU’s approach. Many issues will be common to all member States, though the strength of our economic ties gives Ireland a particular interest. But Ireland has its own unique issues which are of the utmost importance and will need to be addressed as part of this common approach.

We now have, for the first time in centuries, a durable and equitable peace on the island of Ireland.  The border between North and South is now almost invisible.  30,000 people cross it every day to work, do business and to socialise.  They do this without impediment and often without even noticing.  This is very different from the border that many of us still remember, with customs posts and checkpoints creating divisions between territory and between people.  The restoration of a hard border on the island of Ireland would be a retrograde step. Any new EU UK relationship must continue to underpin and sustain a lasting peace on the Island of Ireland.

Furthermore, the connections between Ireland and the United Kingdom are many and deep.  Along with a common language and legal system, the Common Travel Area between Ireland and the UK has been in existence since 1922 and reflects the intertwined close historical links between both islands by allowing the free movement of people to and from both countries since Irish independence. It is important that any new arrangements that may develop between the EU and the UK recognise the necessity for and value of these links.

As we conduct the forthcoming negotiations, it is important that the European Union continues to progress its own development. The EU UK negotiations will be important, but they must not become all consuming.  A European Union that enables growth and is a force for peace in its region and the world will continue to be as important in the coming years as it has in the last sixty years.  By delivering on its full potential the EU can minimise the damage of the UK exit and form the pivot around which all of us can build our future development. Ireland will continue to play its part in ensuring that it does so.

By Charles Flanagan, Ireland's Minister for Foreign Affairs and Trade