The European Commission clears acquisition of SE by EPH

EC concludes that the proposed transaction would raise no competition concerns.

The European Commission has approved the proposed acquisition of joint control over the Slovak energy company Slovenské Elektrárne (SE) by the Czech company Energetický a Průmyslový Holding (EPH). The Italian energy group Enel holds 66 percent in SE while it has already agreed with EPH, owned by Czech and Slovak businessmen Daniel Křetinský and Patrik Tkáč and the financial group J&T, about its sale. The EC concluded that the proposed transaction would raise no competition concerns.

“This is because the overlaps between the companies’ activities are either small or will continue to face strong competition from rival players,” the EC writes in its press release from July 26.

“Moreover, given the existence of alternative sources of supply at the wholesale level, the companies would have neither the ability nor the incentive to prevent their competitors from accessing electricity on the retail market after the transaction,” the EC writes.

After the transaction the state, holding 34 percent in SE, will become its biggest shareholder but it will be EPH and Enel who would hold joint control over SE, recalls the energie.sk website dedicated to energy issues.

From a technical point of view, firstly the whole 66-percent share Enel holds in SE will be transferred from Enel Produzione to a newly established HoldCo company. Afterwards, EP Slovakia B.V., which is an affiliation of EPH based in the Netherlands, can obtain as much as 100 percent of the basic capital of HoldCo, while it can do so in two phases. 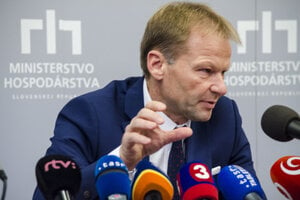 Final settlement and closure of the second phase is conditioned by obtaining a final permit for commercial operation of the third and fourth units of the nuclear power station in Mochovce. These are currently under construction.

The total price for the 66-percent stake in SE was preliminarily set at €750 million, but the final price will depend on various factors.

Slovakia also has a chance to increase its share to 51 percent based on a memorandum signed between Enel and the Economy Ministry. EPH agreed with the memorandum too.