Rainbow Pride in Bratislava on Saturday, opponents as well

After a one-year break, the Rainbow (Dúhový) Pride returns to the streets of the Slovak capital on July 30, with the goal to make life partnership available for all. 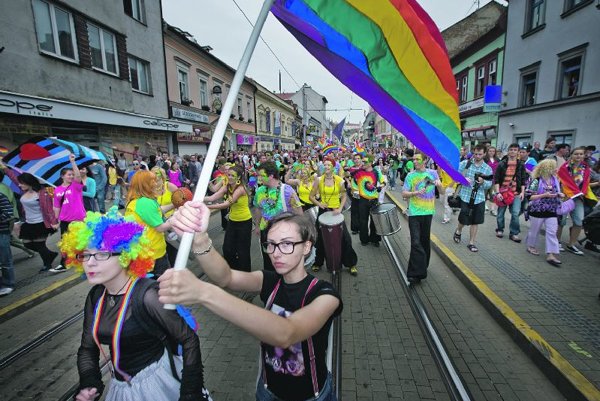 It follows the idea of organising similar events worldwide. This year, the parade will be connected with the campaign Life Partnership, aiming at winning the public’s support for legalising same-sex partnerships and their families, the Pravda daily wrote on July 27.

On the other hand, the Proud of Family / Hrdí na rodinu initiative will make a live chain for “traditional family”, The ĽSNS party of Marian Kotleba wants to protest against “the parade of deviants”. Thus, all three events will coincide, according to Pravda.

“Last year, Slovak society was annoyed with the nonsensical referendum campaign For Family,” Natália Tomeková of the organising committee of Dúhový Pride said. “That was one of the reasons why we decided to found the platform Life Partnership / Životné partnerstvo. Slovakia needs to hear the stories of LGBTI people, their parents, children, friends and colleagues.” The platform’s website already offers seven stories of couples of the same sex. Dúhový Pride has the ambition to bring these stories to the wider public and to show that families of two men and two women – childless or with children – have the same joys and troubles as the “majority families”.

Dúhový Pride starts at 13:00 in Hviezdoslavovo Square with addresses of guests, and after about an hour, a march along the city centre will follow that is to end with a concert.

This event has been registered since June 1; and gradually but not coincidentally, two more events were added. The Hrdí na rodinu event to take place at 15:00 in front of the parliament is duly registered. However, the planned protest by Kotleba – ĽSNS is not yet, though it should be announced with local authorities at least five days in advance, Pravda wrote.

The party website already features an invitation to meet in front of the Main Railway Station and continue “to an apt place to express our protest”. Both Hrdí na rodinu of Anton Chromík and ĽSNS deny that these two events could be merged.

Chromík, the founder of Aliancia za rodinu / Alliance for Family said when asked if the choice of time and place of their event is not an act of spite and too obvious, that he deems it spiteful and too obvious if different views are not expressed in a debate around family and its form. Participants of the live chain will meet and go from parliament to the Main Square – which lies only a few dozen metres form the site where Dúhový Pride ends.

The Pride organisers do not perceive a live chain as a counter-event and invite all people to join them. They also do not feel the urge to react to the ĽSNS protest. Dúhový Pride takes place under the umbrella of the Slovak presidency of the Council of European Union, which ensures greater security measures than usual.