Slovak military is smaller, but adapting

Tank unit is a renewed priority as are new strategies to deal with cyber warfare. 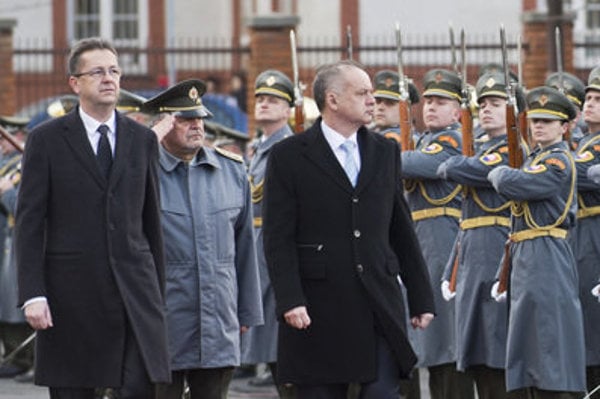 But in the past 23 years, the size of armed forces has shrunk with the number of soldiers decreasing to one-third what it was and just a portion of the weapons -- which were largely outdated.

Despite a marked reduction of the number of weapons and soldiers, the armed forces are currently on sufficient level, according to experts.

"Armed forces, as declared in conception documents, are sufficient as for numbers and suit our needs,” defence analyst Vladimír Bednár commented for the Sme daily.

The army now must be perceived mainly as part of NATO – which is, among other things, also about guaranteeing collective security. Attack on a single NATO member state is seen as an attack on all of them, he said.

"The main task of armed forces and of Slovakia in the Alliance is to secure and guarantee own defensive capacity,” Chief of the Slovak General Staff Milan Maxim said. "Of course, the level of modernisation and readiness of armed forces corresponds with current efforts.”

The debates on the state of Slovak army usually end with the issue of finances and modernisation.

How is the Slovak army doing?

Bednár, too, talks about the need to modernise more. While the defence concepts are sufficient, according to him, their implementation is more troublesome. "Now, most of the vehicles and machinery are past their durability life. I also see problems in the quality of staff and other issues,” he added.

The make up and orientation of the army is changing. While former defence minister Martin Glváč of the Smer party was slammed by analysts for lack of strategy in purchasing, the current leadership of the ministry under minister Peter Gajdoš (SNS nominee) is changing priorities. After the situation in the world has changed, also the form of Slovak army will be changing, as part of NATO requirements.

While a few years ago, the stress was still put on air force, ground forces should move to the foreground again. Thus, tank troops should be developed which was meant to be scrapped under Ľubomír Galko, another ex-minister (of the SaS party). The pledge is to have on mechanised brigade battle ready by 2018.

However, according to the proposed White Book – a summary of defence-security concepts of the state – a new idea also is to introduce attack helicopter. The reason is international situation, according to Gajdoš. "The development in Ukraine is involved, as well as threats like terrorism, extremism and migration waves,” he said.

The fight is also in cyberspace

The key thing in further build-up of the army will be, just like in the past, finances. In the long term, Slovakia is still under under its pledge to give 2 percent of GDP for this purpose. Currently, this number stands at 1.15 percent, while at last year’s Wales summit, the country promised to increase it by 2020 to at least 1.6 percent of GDP.

"We will try fulfil our obligations to maximum level,” Gajdoš says. Whether it will be successful remains an open question. The outlook for the next year is, so far, an increase to a mere 1.16 percent.

It will depend on these figures in the upcoming years, according to analysts, whether the planned tasks and goals in modernising and equipping will be fulfilled. Gajdoš for now plans to file each bigger project to the government for approval, while Finance Minister Peter Kažimír could release the additional financial resources exceeding the planned budget.

In the upcoming period, the Slovak army plans to focus not only on purchase of new weaponry and vehicles but also on fight in cyberspace, for example. The superiority in cyberspace can help also a side which is weaker in common arsenal.

"The use of most modern technologies, including cybernetic abilities in the use of the means of electronic fighting can lead to situation in the combat on battlefield when any system whose operation is based on the use of electric power is made dysfunctional, or even destroyed,” the Defence Ministry states in the White Book.