Kiska met Pope Francis at WYD, invites him to Slovakia

Slovak President Andrej Kiska met Pope Francis at the Wawel Castle in Krakow on July 27, during the World Youth Day in which also Slovaks participated. 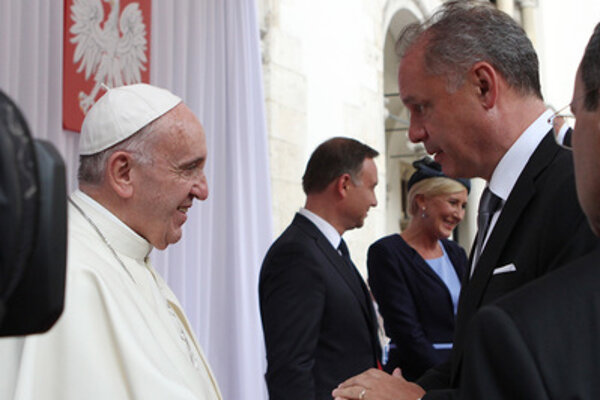 Kiska said he would pass the Pope a greeting from people across Slovakia and invite him to visit of our country. “We’ll be immensely happy if he comes,” said Kiska, as quoted by the TASR newswire.

The Slovak president also expressed his admiration for the organisers and volunteers of the World Youth Day. “Kudos to the volunteers and organisers that I had the opportunity to meet,” he said. “For their own money and perhaps even a little bit of their own health, they’ve been doing here a tremendous amount of work to see such a meeting happen. I’m very pleased that we also have such young people in Slovakia,” said Kiska following a meeting with pilgrims, volunteers and bishops in Skawina, Poland.

The six-day World Youth Day event in Krakow was launched on July 26, with around 500 million people from 187 countries having officially registered. The organisers conceded that in the end as many as 1.5 million people could turn up at the event.

This is already the second meeting for Kiska with Pope Francis, after a personal audience last year in April when they discussed the role of church, its openness, baptising children of unmarried mothers and the importance of faith, the SITA newswire wrote.

When Pope Francis flew over Slovakia toward Poland, he called out blessing of God on Kiska and Slovak citizens, and he sent a congratulatory telegram as is his habit, according to a tradition, SITA wrote.