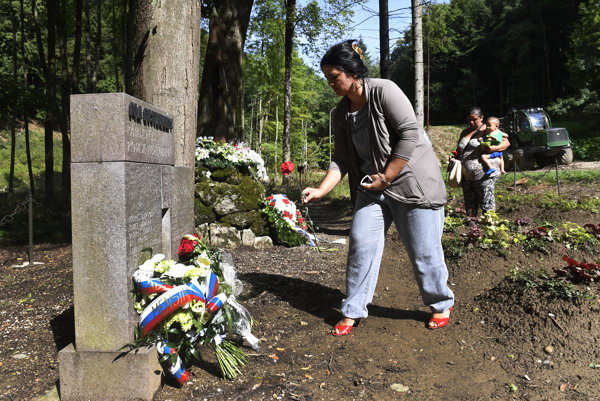 A commemoration of injustices perpetrated against the Roma during WWII was held in Dubnica nad Váhom (Trenčín Region) on August 1 exactly at the site where 26 ill Roma were brutally murdered in the final stages of the war. The commemorative event was organised by the civic association In Minorita and was part of the Ma Bisteren! project linked to Tuesday’s Roma Holocaust Commemoration Day, August 2.

Opening with the Roma anthem Gelem Gelem performed by violinist Barbora Botošová, the ceremony was attended by representatives of the state administration, municipalities, the Slovak Association of Anti-Fascist Fighters, Roma women with children as well as Richard Fitzmaurice from the US Embassy to Slovakia.

In Minorita project manager Zuzana Kumanová sees it as a necessary to mark places where persecution of Roma occurred.

“It’s important to commemorate concrete people who were murdered and who were suffering,” said Kumanová as cited by the TASR newswire, adding that Europe is still confronted with racist and neo-Nazi views. “It’s necessary to speak about the major persecutions that occurred during WWII and which were based only on ethnicity – whether targeting Jews, Roma or other groups.”

Fitzmaurice of the US Embassy to Slovakia is convinced that it is important to hold commemorations at places where people departed from the world in such inhumane conditions. He believes that public participation in such events is necessary in order to commemorate the Roma Holocaust, the knowledge of which is not so common among people.

“For us, it’s a commitment to fight for rights and equal treatment of all people, regardless of nationality or ethnicity,” he said.

The internment camp in Dubnica nad Váhom was founded in November 1944 and held prisoners marked for deportation to concentration camps outside of Slovakia.

“Around 700 persons were interned in the camp, which manifold exceeded its capacity,” said Kumanová. “They brought here entire Roma families, with women and children included.”

In late 1944-early 1945, a typhus epidemic broke out in the camp. Ill people were tricked with promises that they were being transported to a hospital in Trenčín. Instead, they transported them to a premise of the then ammunition factory close to Dubnica, made them dig a pit and then they were shot dead. Exhumations conducted after the war discovered that some victims were not killed by bullets, but were buried alive.

After the war the 26 bodies were exhumed and buried again in independent graves. Later, workers of the factory built a memorial from cannon shells and took care of the graves. In Minorita, thanks to state subsidies, built a memorial and fenced the cemetery.