The name of the central-Slovak village Kunerad has caused sleepless nights for several linguists. 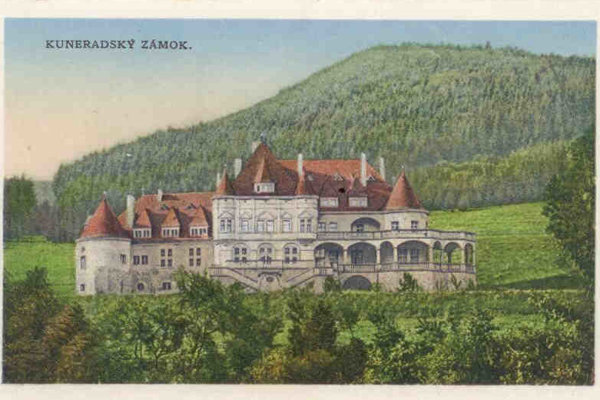 Its name is slightly mysterious, and every scientist has his own view. Let us contribute to this chaos a bit.

Most frequently, the name is thought to be derived from the word for horse. In Slovakia, hills as well as municipalities were named after this animal – but in Slovak, the word is kôň, not “kun”. From among fauna, the Slovak word for marten, kuna, could also be an option.

Another possibility is to turn back to ancient Slavonic noblemen, as one of them

with a similar name could have owned this area. Eventually, as is often the case, the most probable version will be the least appealing. The word kuneraz was used in Middle Ages for a hog, and so it is quite possible that Kunerad was a vassal village where the main occupation of inhabitants was hog breeding.

However, in popular knowledge Kunerad is not as much associated with hogs as with a notable hunting mansion which German count Ballestrém ordered to build in 1914 – 1916. Apart from hunting, the ostentatious cosntruciton should have also served as summerhouse for Austrian and German emperors, Franz Joseph and Wilhelm II. Generous plans of the count were ultimately marred by World War I, and thus in the end the mansion was just a small part of what was expected from it.

Its owners, the Ballestrém family, used to come here two times a year, in spring and in autumn. During their stays, they usually enjoyed the vast forests of their dominion, liked to watch forest workers at work, and of course, hunted passionately. People remember the Ballestréms as an educated and friendly bunch.

During the Slovak National Uprising, guerrilla headquarters were located here, and Germans later punished this fairy-tale mansion in the way quite usual then – burning it down. Despite Kunerad being repaired after the war, today it is again in a lamentable shape, as has become a vicious Slovak tradition.

In this postcard from the 1920s, we can see the mansion still in its full beauty.