Despite the huge distance between Slovakia and Chile, the two countries are facing the same problems in the field of education, Slovak President Andrej Kiska said during his visit to Chile. 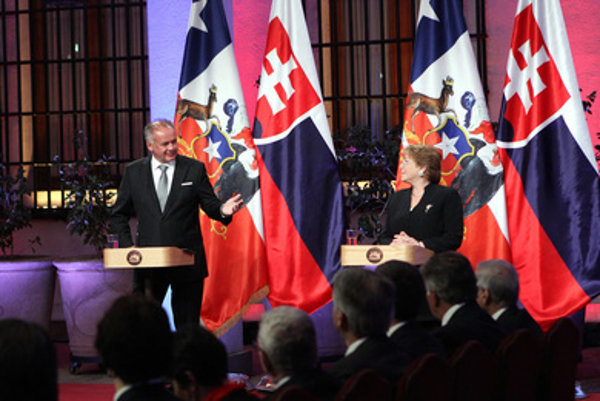 Kiska compared the two countries after his visit to two renowned universities, the Catholic University and Federico Santa Maria University, in the capital Santiago on August 2.

“I’ve visited two universities in Chile, both of them among the top in Latin America,” the president stated, as quoted by the TASR newswire. “At both of these universities you can see a strong interest in interconnecting practice with education, getting young people involved and encouraging them as much as possible.”

Although they can boast of several successes at present, this was not the case several years ago. “However, it was decided that education must be the priority, and things have moved on,” explained Kiska.

Slovak universities must also deal intensely with ways of connecting education with practice, develop innovations and create an environment to reflect students’ work in practice, says the president. “We should support the creation of new projects so that there are more companies in Slovakia like ESET and Sygic,” he noted. “Every experience, every idea that can move our universities forward is welcome,” Kiska added. [ESET develops anti-virus software, while Sygic produces GPS applications.]

As an example of positive relations in this field, Kiska mentioned the signing of an agreement on cooperation between the Federico Santa Maria University and the Žilina University. The cooperation will include things like student exchanges. “The goal is to move our education system forward by getting to know each other and seeking the best scenarios,” the Slovak president said.

At the end of his stay in Chile, Kiska highlighted “the huge amount of headway” that the country has made since his last visit there 13 years ago. “Chile is the most successful South American country. This is visible in everyday life ... I’m glad that this country is doing so well,” he summed up.

Kiska ended his official visit to Chile on August 2, moving on to neighbouring Argentina. The next day, Kiska held talks in Buenos Aires with his Argentinean counterpart Mauricio Macri. He is also visiting the Latin American branch of the Slovak company ESET and meeting Slovaks living in Argentina. Subsequently, he will travel to Brazil to attend the opening ceremony of the Summer Olympic Games in Rio de Janeiro.