The 15th year of a multi-region event with international participation called Ľudia z Rodu Rómov (People of Roma Kin) kicked off its first day on August 3. 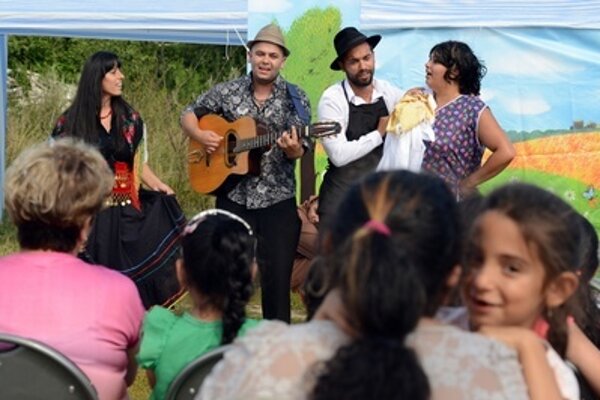 The programme, to last for four days, kicked off at the Roma settlement Na Hrbe in Banská Bystrica.

The theatre group ARA ART from the Czech Republic performed the play “Čirikloro, or What the Bird Says” – a Roma fairy tale – in an outdoor setting for the first time ever. A teaser of the fairy tale, conceived by the founder of Czech Romani studies Milena Hubschmannová, was played for the benefit of media already at a press briefing.

“Thursday (August 4) will be dedicated to the Roma Holocaust Commemoration Day, when we will organise a commemoration in front of the Slovak National Uprising Museum in Banská Bystrica titled Leperiben – We Won’t Forget,” festival director Andrea Bučková told the TASR newswire. “The evening programme will feature performances by popular Slovak actress Adriana Drafiová-Gitana, Marta Balážová and Pavlína Matiová from the Czech Republic, as well as a musical trio headed by Viliam Didiáš. The evening will conclude with readings from the book of the dead and a light show projection on the museum building to commemorate atrocities and acts of cruelties that occurred not so long ago,” she added.

Bučková also said that the names of some 270 victims of the Roma Holocaust in Slovakia and the Czech Republic will be read aloud by Justice Minister Lucia Žitňanská, Ombudswoman Jana Dubovcová and other personalities of public and cultural life.

Melodies of classical music and jazz influenced by Roma culture will fill the Regal Hall of Zvolen Castle on the evening of August 5, performed by various distinguished artists.

The event will culminate on August 6 in the Worker’s House (Robotnícky dom) in Banská Bystrica with a gala programme, offering music, live singing and dance performances in one-of-a-kind mood to be set by Slovak, Czech, Hungarian, and Romanian groups and orchestras.