Pride back in Bratislava 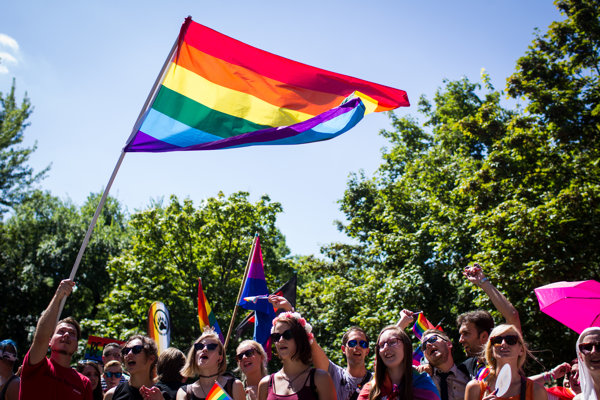 After a one-year pause, the Rainbow Pride festival aimed at supporting lesbians, gays, bisexuals, transgender and intersexual (LGBTI) rights returned to the streets of Bratislava. A 2,000-strong crowd marched through the capital on July 30 as attendees continue to push for legal changes to protect their rights.

“In terms of public discussion the Pride festival allows more and more people start to understand that LGBTI people are the same as others, that they have the same desires and problems,” Martin Macko, head of the Initiative Inakosť and one of the organisers, told The Slovak Spectator.

Two counter-events were organised on the same day. Some 150 Christian activists made a live chain in front of the parliament and then marched to the centre. Another, unofficial meeting was organised by far-right People’s Party – Our Slovakia (ĽSNS) led by Marian Kotleba, with the participants marching from the train station towards the centre.

As the march lacked official permission from the Old Town, its organisers called the gathering “a spontaneous event” and explained they wanted to collect signatures for a petition for Slovakia leaving the EU and NATO, TASR reported.

Last year, LGBTI supporters marched only in Košice. Organisers contended the atmosphere in society after the February 2015 referendum aimed on supporting the traditional family made a march in Bratislava counterproductive. The public was “annoyed by the nonsensical pre-referendum campaign”, which resulted in a drop in support for the LGBTI community, Macko said.

“The main problem is that only a few people in Slovakia personally know a gay or a lesbian living in their neighbourhood,” Macko said, referring to the results of a Focus poll carried out for the initiative that suggested that up to 60 percent of the respondents do not personally know any gays or lesbians.

As a result, the organisations protecting LGBTI rights launched a new platform, Life Partnership, where they published several stories of these couples. The platform also became one of the main motifs of the 2016 pride.

They also focused on activities that are not very visible now, like conducting a poll among same-sex couples to learn more about their current situation and problems. Based on their activities they plan to introduce a draft law on life partnerships, Macko added. 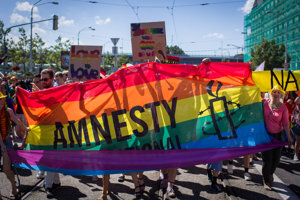 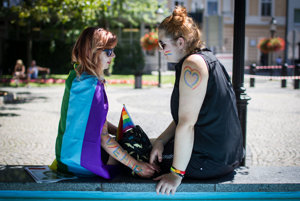 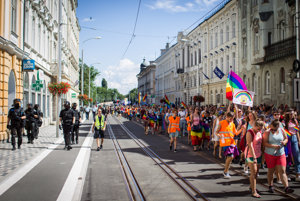 Similarly to previous years, the pride event was supported by 19 embassies and the European Commission’s Representation in Slovakia. In addition, the 2016 edition took place under the auspices of Slovakia’s presidency of the EU Council. This means that the organisers were allowed to use the official presidency logo, according to the Foreign Affairs Ministry’s statement.

This was, however, criticised by the coalition Slovak National Party (SNS), whose chair Andrej Danko claimed in a statement that he will ask Foreign Minister Miroslav Lajčák for an explanation.

“SNS has already said its main objective in this government is to block all activities helping LGBTI people, and so far it is successful in doing that,” Macko said, adding this shows it is unable to get rid of its image as an anti-minorities party.

Officials from the Smer party have also not shown much interest in addressing the LGBTI agenda. Macko considers it important that the politicians and also some personalities symbolically express that LGBTI people are also equal part of society and local community.

However, the fact remains that only Justice Minister Lucia Žitňanská (Most-Híd), whose department now oversees the human rights agenda, is careful in her statements about LGBTI people, the Denník N daily reported.

“I am convinced that people regardless of their sexual orientation should have a legislative framework allowing them to arrange their life,” she wrote in her Facebook status, as quoted by Denník N. “I respect various opinions on this topic, but I condemn spreading the hatred we could witness in connection with Pride.”

She repeated that the laws addressing the LGBTI agenda are still missing, stressing that the legislation may be adopted only if this community is accepted by the majority in the government, parliament, and also society.