The ceremony remembered a young German man, who was trying to escape to Austria in 1986. 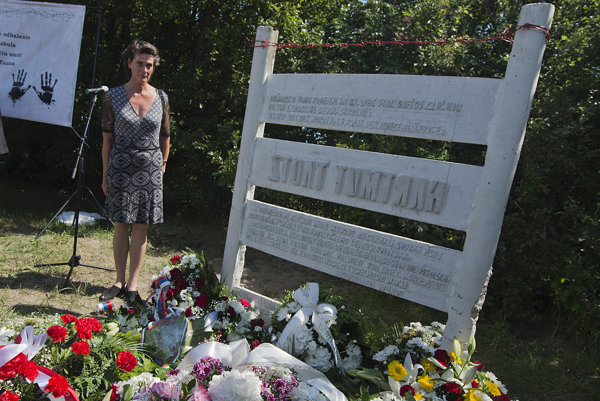 A memorial dedicated to 18-year-old Hartmut Tautz from Eastern Germany was revealed at the end of Kopčianska Street in Bratislava’s Petržalka borough. The young man was killed on August 8, 1986 on the border when trying to flee to Austria.

The memorial should remind people of one of the most tragic events that happened close to the Iron Curtain in former Czechoslovakia, the TASR newswire reported.

“Hartmut Tautz was a boy who did not want to conform to the totalitarian regime,” said Neela Winkelmann, managing director of the Platform of European Memory and Conscience, as quoted by TASR, adding he only wanted to be free.

Tautz’s fight for a free life and his courage should be a memento to all, she added.

The specific feature of the memorial is that his name is written from the back to the front. The reason is that when people were watching those trying to cross the borders, they were not looking in their eyes, but at their backs. It should also remember an old habit between Tautz and his sister who called themselves by saying their names from the back when they were little children, TASR reported.

The memorial should remind passers-by that freedom and democracy are not for free, said Pavol Frešo, governor of Bratislava Region. It should also remind of other young people who risked their lives by trying to escape to the West, added Ondrej Krajňák, chair of the board of the Nation’s Memory Institute (ÚPN).

“More than 400 lives were taken at the whole border line of the Iron Curtain during the former regime,” Krajňák said, as quoted by TASR, adding that 42 people died in Slovakia. “Even more people were detained when trying to escape, but there were also those who managed to run.”

ÚPN plans to soon publish the names of all victims of the Iron Curtain, as well as investigators and judges who dealt with their cases.

The participants of the ceremony also called on those responsible for Tautz’s death to apologise to his family.