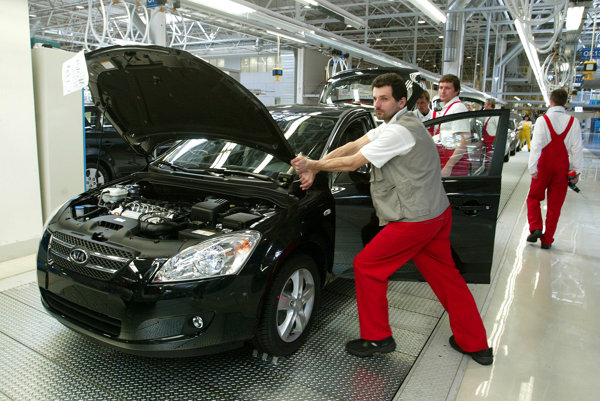 The Slovak market is becoming more and more attractive for Korean investors. Some large companies from the Republic of Korea have brought a large number of small entrepreneurs to Slovakia but cooperation between the countries will be strengthened as the Korea Trade-Investment Promotion Agency (KOTRA) opened its doors in Slovakia in mid-December 2015.

KOTRA is a state-funded trade and investment promotion organisation operated by the Korean government since 1962 with a wide network of branches around the world.

Its Slovak branch seeks to expand and strengthen partnerships with Slovakia and create a communication channel in business, said KOTRA’s director Kyuchul Choi in an interview with The Slovak Spectator.

“As the commercial section of the Korean embassy, KOTRA aims to fulfil the role of a gateway in business routes for Korean companies that cooperate with Slovaks and also for Slovak companies doing business with Koreans,” Choi said.

In the first few months of operation, representatives of KOTRA were tasked with meeting many people from associations, agencies and companies to understand the Slovak market and culture. Choi considers doing business to be very limited without gaining knowledge of this kind.

KOTRA started doing this, for example, already during the opening ceremony of its office when it and the Slovak Automotive Industry Association (ZAP) signed a memorandum of understanding to primarily help in further development of the supplier network in the automotive industry.

KOTRA rates the general business environment in Slovakia as worthy and modern mainly from the perspective of infrastructure, labour force, its location in the middle of Europe and friendliness to investment and business. Choi noted that he does not feel any barrier to communication with people, which is one of the important matters for foreigners.

Yet one of the problems difficult to overcome is that Slovakia provides a very small market. When Korean companies go to the USA, China, Vietnam or Indonesia, they can always sell their production, Choi said, but in Slovakia they cannot.

“Lots of Korean companies supply Samsung and Kia like their customers,” Choi said.

Another big problem for Korean companies already here, as well as for potential investors, is the lack of a readily available labour force. For entrepreneurs it is very difficult to find labour, particularly those talented and educated, according to Choi.

Choi acknowledged that localisation is one of the main priorities for Korean companies in Slovakia and therefore the availability of a well-educated and talented local labour force is very important.

“For example in Kia Motors Slovakia, currently more than 90 percent of the positions that used to be filled by Korean managers at the beginning, are now held by Slovaks,” Choi said.

Though Korean entrepreneurs focus in particular on these industries, Choi pointed out the food and IT sectors as other strong business areas with which they cooperate. Slovak startups look for expansion to foreign markets not only in Europe and Koreans could help them expand to Asia, Choi said.

“We perceive this as an area for closer cooperation that can be highly efficient for both parties,” Pribula told The Slovak Spectator.

However, in recent years the company has had reduced exports to the key Russian market due to the conflict in Ukraine, EU sanctions and the appreciation of Russian currency from 45 to 85 roubles per euro. In 2013, KIA exported 70,000 cars to Russia but it fell to 45,000 in 2015 and this year’s forecast is for only 35,000 cars, said Eek-Hee Lee, President and CEO of Kia Motors Slovakia, in an interview with the Sme daily.

“Exports to the Russian Federation are still declining, therefore we are trying to sell vehicles to other countries,” Lee told Sme, noting the current exports to 70 countries. “We are planning to expand and cover up to 100 countries in the world.”

Kia, ZAP and KOTRA cooperate significantly on the development of communication between Korean companies and all companies active in the automotive industry. In this cooperation framework, they have been preparing a Supplier Forum that may be held in Žilina in autumn 2016.

Currently, Kia Motors Slovakia produces three model series – cee’d, Sportage and Venga. In the near future, the only Kia plant in Europe might launch production of another model that is currently being developed in Kia’s design centre in Germany, Sme wrote.

Companies from Korea, including Kia, prefer their home country and countries with stronger backgrounds in innovation for their R&D centres. In addition, the Slovak business milieu has received many critical comments in the past aimed at the lack of potential, infrastructure and support in R&D as Slovak industry at this point essentially assembles products without much higher added value.

Choi noted that though the economy still specialises mainly in industrial assembling activities, it would benefit from more balance between traditional industry and softer sectors of the economy such as R&D activities, innovations, consistent investments into science and education. Slovak government has already made many steps the right direction through supporting startups and introducing dual educational systems, he said.

“However, there is still lots of other things that need to be done in order to create a system which will provide the supporting net for the successful future development of the Slovak economy,” Choi said.

Business cooperation between Slovakia and Korea may bring new entrepreneurs to Slovakia. KOTRA has knowledge of several Korean companies not only from the automotive industry but also from others including telecom sector.

Potential for cooperation between Slovakia and Korea lies also in trade. In 2015, South Korea with a share of 6.6 percent (€4.25 billion) occupied fifth place out of countries which imported goods and services to Slovakia, while export of Slovak companies to Korea amounted to only to €109 million, according to statistics of the Economy Ministry.

For the future, there are also trading opportunities in medical and IT areas that KOTRA plans to help transform into long-lasting partnerships, Choi said.

The ministry confirms the government’s concern with statistics that since 2004, 19 investment plans from Korea have received support worth a total value of more than €460 million of which €124 million came in the form of tax relief.

In late-August 2016, moreover, a delegation including representatives of the Korea Institute for International Economic Policy which is currently preparing a project on the topic of “Major Industries in Slovakia and Measures to Enhance Korean-Slovak Industrial Cooperation” will come to Slovakia, Stano informed.