Urban cycling is moving ahead 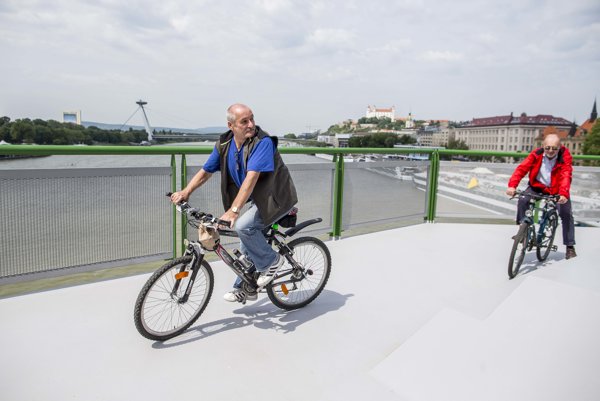 Though Slovakia is seemingly witnessing a boom of cycling, it still has much to do to catch up with more developed countries. The Netherlands has recently offered a helping hand and its experience with incorporating cycling into the ordinary lives of Slovaks.

Assistance was offered by the Ambassador of the Netherlands to Slovakia, Richard van Rijssen, at a meeting with Transport Minister Roman Brecely in early July.

“Through sharing the cycling expertise we can help to improve the cycling mobility and infrastructure in Slovakia,” Rijssen told The Slovak Spectator.

The Netherlands can provide experts from all fields including spatial-planning, policy making, research and many more, he added.

Netherlands as a cycling leader

The Netherlands is a country which has managed to make bicycles a natural part of life. The situation, however, has not always been like this, Rijssen admits.

The use of cars in the Netherlands increased significantly in the 1960s and led to higher congestion, air pollution, traffic accidents and poorer quality of life. As a result, the Dutch government decided to start adopting measures to promote cycling, walking and traffic calming, Rijssen explained.

“Nowadays, 36 percent of all Dutch traffic movements are done by bike and we have even more bicycles (22.5 million) than inhabitants (17 million),” Rijssen said, adding that in some cities, it is even up to 70 percent.

The difference between Slovakia and countries with developed cycling transport is that here it is still considered an additional means of transport.

“While abroad the bicycle is becoming an adequate alternative to other means of transport, many people in Slovakia still prefer individual motoring,” Transport Ministry’s spokesperson Karolína Ducká said.

As Slovakia improves in developing its recreational cycling, it lags behind in the field of urban cycling in the cities, Rijssen says. Some of the capital’s boroughs, for example, are not well connected to the city centre and it is almost impossible to cycle in the historical city centre of Bratislava.

“In the Netherlands, we do have similar cities with old closed city centres, such as Utrecht or Groningen and thus it may be useful to draw cycling inspiration thereof,” the ambassador added.

But the situation in the capital is improving and the number of cycling lanes built separately from roads is increasing. Moreover, the first bike box, i.e. a designated area at the head of a traffic lane that provides cyclists with a safe and visible way to get ahead of queuing traffic during the red signal phase, was built on Dunajská street, Rijssen said.

“Exactly these kinds of measures are necessary to enjoy the use of bicycles in the cities,” he added.

Also the number of bicycle stands in Bratislava has been increasing steadily over the past year. In addition, the Netherlands also contributed to the trend during its six-month presidency in the first half of 2016, with presenting a new orange bicycle stand to the city of Bratislava which is located in front of the Slovak Radio building.

Representatives of the city say that building the cycling routes belongs among their priorities. The plan is to gradually connect the city boroughs with the city centre, Bratislava’s spokesperson Ivana Skokanová told The Slovak Spectator.

“The city allocates money for development of cycling routes every year,” she added. “For 2016 it is €420,000 to prepare projects, maintain the old cycling routes and build the new ones.”