When you are sending Roma to gas chambers, are you also sending the eight-year-old Anička from Veľká Ida who has a bigger Charisma than the whole coalition government? 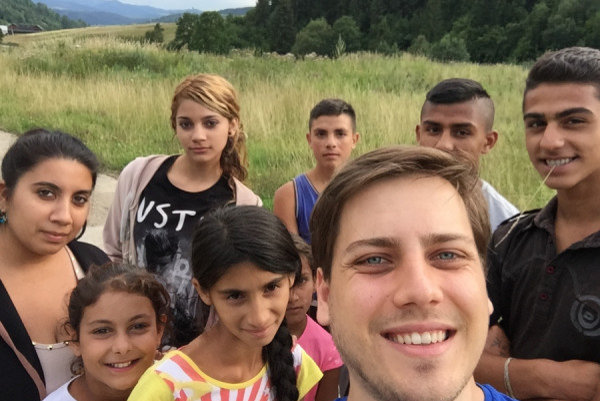 Whether we talk about Roma or anyone else, it is our responsibility to get to know those who are often being discussed in pubs talks and those who are being insulted, in order to find out whether we are right or just full of prejudices.

Last week I took part in the camp Competent Children – Summer Academy without Prejudices in Vyšné Ružbachy where I got to know 48 children and 10 camp leaders. Children came from three settlements: Veľká Ida, Rankovce and Stará Ľubovňa. Camp leaders work as social workers in the community centres in those Roma settlements. The camp was a project of the non-governmental organisation ETP Slovakia. I attended it as a volunteer who prepared a few media-related activities.

First of all I would like to say that Roma children are the same as any other children. Some of them were smart, others a bit less so. Some of them behaved; others sabotaged any activity we tried to pursue. The only thing that might have been a bit different was that I underestimated their potential, as a result of my own prejudices. When it came to action, however, they always surprised me and exceeded my expectations.

#2 Love your neighbour as you love yourself

I might have never before seen such a clear demonstration of this biblical quote. Children helped each other, advised each other and supported each other. It seemed as though individualism, nowadays so widely spread, is unknown to them. It doesn’t mean that they didn’t compete with each other but when they were asked to work in groups, I could see how they complemented each other. And it was seen even in ordinary situations, such as serving tea during breakfast. Every morning someone stood up and served tea to everyone.

#3 Slovak and Roma as foreign languages

One of the camp rules was to speak in the Slovak language. The aim was to improve the Slovak language of children as it is the main language spoken by the majority. However, Roma children need to learn it as a foreign language because in the settlements they mostly use Roma language. Do you think that Roma is a unified language? I thought so. However, I have realized that differences among individual dialects are remarkable. Roma language is based on one of those dialects and Roma children from other settlements need to learn even their “own language” as a foreign language. It is one of the reasons why they cannot unite, let alone integrate into the majority.

#4 Children have fun and dance as tomorrow may never come

I have been to many dance parties, I have even danced semi-professionally; however, I have never seen such dance show as performed by some eight-year-olds. None of the kids had attended private dance classes. Their moves were not learnt. They have the dance in their blood. I know it may sound like a cliché. Nevertheless, I could not reach any other conclusion when I saw them dancing. I had anticipated they were great musicians and singers but these kids simply have it.

#5 Eagerness to overcome one’s shadow and achieve something

Children were divided into seven groups consisting of seven members (only one group consisted of six children). In my group I had the 16-year-old Miro, a football player of a team in Stará Ľubovňa. A full-grown fella who was very smart and studious. When we played table tennis, he asked me to teach him a few moves. I showed him a couple of tricks and we trained. When we were in the pool, he asked me to teach him to swim. I knew I could not provide him with enough attention; nevertheless, I showed him the technique so he could practice. He tried, he struggled but he succeeded in staying above water. His eagerness to learn, practise, try and overcome his own shadow was very inspirational.

I admire people who have decided to help those who are condemned by most. And they do it for a few hundred per month. It is admirable that they did not conceive hatred for these children but are constantly there for them and do what they can, which, of course, can be noticed in these children. It would not be possible without their love for children and their willingness to give. The whole Slovakia can be grateful to those people because they are bringing up future generations of Roma who will be educated and self-sufficient.

#7 Educated Roma who are returning back to their communities

For a while now it has not been true that an educated Roma is an oxymoron. They study at universities and some of them go back to help the communities they were born in. There were five camp leaders of Roma origin at the camp who worked with children and encouraged them. To tell the truth, children perceive it differently when something is explained by “one of them”. The children need these role models to see that change is possible.

#8 Prejudice does not help

When you say that Roma steal, do you also talk about Lukáš, a social worker, who was brought up in the settlement and now he teaches children how to treat their neighbour? When you say that Roma are lazy, do you also talk about Miro from Stará Ľubovňa who practices football four times a week? And when you are sending Roma to gas chambers, are you also sending eight-year-old Anička from Veľká Ida who has bigger Charisma (with capital C) than the whole coalition government?