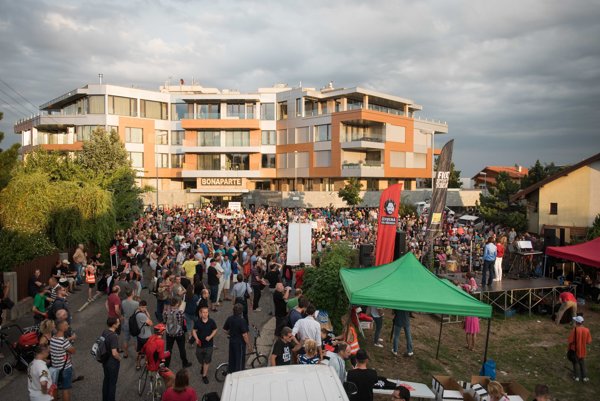 Apart from holders of White Crow awards granted for whistle-blowing, also active politicians attended the ninth protest in front of Prime Minister Robert Fico’s private flat in the Bonaparte housing complex in Bratislava on August 15, aimed primarily at ousting Interior Minister Robert Kaliňák (Smer). One of them Alan Suchánek, MP for opposition Ordinary People and Independent Personalities (OĽaNO)-NOVA, called on people to hold a general protest on September 16, the day when Bratislava will host a summit of European leaders; in case Fico does not recall Kaliňák by September 15.

“I urge people to invite friends and acquaintances to attend,” said Suchánek. “There has to be a lot of people, maybe even 50,000.”

About 1,000 people attended the rally on August 15. It was again overseen by the police and no problems occurred.

Apart from Suchánek, who returned the White Crown award after PM Robert Fico accused him of involvement in an overpriced tender, also politicians Peter Osuský from the Freedom and Solidarity (SaS) party and head of SaS Richard Sulík or MPs for OĽaNO-NOVA Igor Matovič and Jozef Viskupič delivered speeches. Holders of White Crow awards Ján Mičovský and Ľubica Lapinová spoke as well.

Mičovský sees the Bonaparte complex as the symbol of the biggest problem of this country and as Slovakia’s Bastille.

“I am convinced that the building as well the people will fall,” he said as cited by the SITA newswire. “The Bastille has fallen, Bonaparte [complex] will fall and you will fall too.”

Lapinová, who used to work as supervisor and was ousted after she tried to point out mismanagement at her employer, said that when somebody is carrying out her or his job improperly, he or she would be stripped of fit. 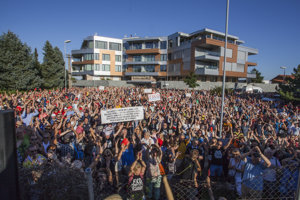 Again the protesters called for the dismissal of Interior Minister Robert Kaliňák.

Protests have been organised regularly since June 20 by opposition parties SaS and OĽaNO-NOVA, in response to the so-called Bašternák case. They are calling for Kaliňák’s dismissal over the Ladislav Bašternák tax fraud case. The minister allegedly helped to sweep the case under the carpet, according to the opposition.