Slovak kayak sprinters Erik Vlček and Juraj Tarr unexpectedly made it to the finals in double kayak, K2, on August 17. 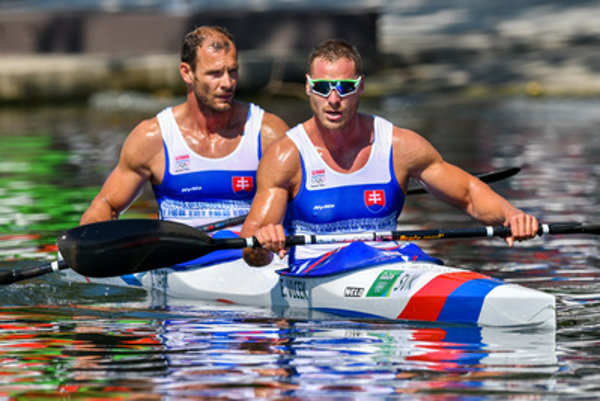 Slovak kayak sprinters Erik Vlček and Juraj Tarr unexpectedly made it to the finals in double kayak, K2, on August 17.

Originally, they did not fare well in training as well as in competitions in this discipline this year, and so they focused rather on the four kayak discipline. However, when they finally decided to scrap K2 for the 2016 Olympic Games in Rio, it was already too late, their coach Peter Likér told the Sme daily. They would be excluded also from the four kayak, and thus they decided to try their luck after all.

“We came here and hoped that Jesus will be generous to us,” Vlček said. “We did not train at all, but we did not want to give it up.”

They started at a mild pace but in the semi-finals they controlled the third position all the time, and gave their best. “Thank God, there was no need to compete too strongly,” Vlček commented. “It was not an ideal race but it sufficed for the finals, and each Olympic finals is an achievement.”

However, they are not too fixed on winning a medal in the K2 1000 metres, Sme wrote.

From among other Slovak hopefuls, female kayaker Martina Kohlová ended fifth in the second semi-finals in K1 – single kayak – on 500 metres, and did not proceed further. On August 1, she will race in the B-finals, for places 5 to 8.

Hammer thrower Marcel Lomnický made it to the finals from 10th place in qualification rounds with an achievement of  74.16 m.

Athlete Lucia Hrivnák Klocová did not proceed to the finals from the first rounds for the semi-finals in 800 m, ending 28th in total – 24 runners made it to the semi-finals.

Triathlete Richard Varga will also compete on Thursday, August 18, according to Sme.