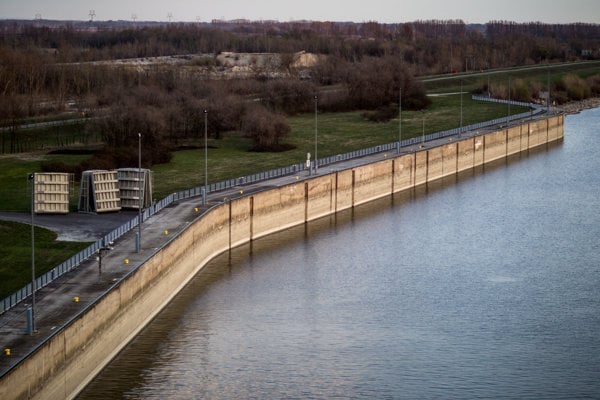 Frequent high water on the Danube , floods in the basins of Hornád, Slaná, Hron and Ipeľ rivers and proper operation of Gabčíkovo water dam have long worried Slovak experts in water management.

As experts from the Netherlands are among the world leaders in protection of coastal territories, Slovak authorities have collaborated and discussed solutions with them, with cooperation increasing since the signing of a Memorandum of Understanding in mid-November 2013.

Cooperation is still ongoing, said Richard van Rijssen, the Ambassador of the Netherlands to Slovakia.

There is a strong interest on both sides,” Rijssen told The Slovak Spectator, adding that the cooperation will continue "thanks to many achieved positive results and further opportunities that lay ahead of us”.

Measures of the memorandum

The memorandum focuses on the exchange of knowledge between government institutions, companies and researchers. Major emphasis goes to the management of flood risks, water supply, wastewater drawing and treatment and geographic information systems, according to the Environment Ministry.

The Dutch Embassy witnessed intensive cooperation between water experts mainly in the period 2014-2015, which resulted in studies and reports on flood prevention measures and the optimisation of water management.

The Dutch side has engaged a water management cluster composed of governmental, business and non-profit institutions including DLG agency of the Dutch Ministry of Economy, Deltares, a world-leading independent research institute of water and subsurface, and Arcadis houses’ experts in engineering design and consultancy, Rijssen said.

Before and after signing the memorandum, Dutch and Slovak delegations met together, established important networks, conducted various studies and reports and identified further areas of cooperation, Rijssen said.

“Although an extra effort was sometimes needed to establish the right connections between the water experts, an intensive knowledge and expertise exchange has nevertheless taken place in the past years,” Rijssen said.

In contrast, Rusnáková pointed out that water experts started to cooperate during the last decade of the 20th century thanks to the UNECE Convention on the Protection and Use of Transboundary Watercourses and International Lakes. Dutch experts provided experience in protection and management of cross-border water sources, she said.

“Also experts from other post-socialist countries involved to the cooperation which was financed by the Dutch government,” Rusnáková said.

Rijssen pointed to Dutch expertise with water issues in the Rhine and Meuse river deltas. Water management is an important climate change challenge especially when bearing in mind the requirements of the WFD and Natura 2000, she said.

Both sides benefit from the rich history of water planning in the former Czechoslovakia which was among the best in Europe, Rusnáková added.

The Danube region is not completely new to experts from the Netherlands who provided software to the Gabčíkovo water system prior to Slovakia’s accession to the EU, and also signed a memorandum on water cooperation with Hungary more than a decade ago. Another Dutch project analysed the fish migration on the river, mostly in Romania, Rijssen noted.

“The outcomes of the research on fish migration in Gabčíkovo were published via the International Commission for the Protection of the Danube River,” Rijssen said.

The Dutch Embassy recently organised a round table for water experts from Austria, Hungary and Slovakia in order to discuss future leads on Danube. Moreover, Bratislava will host a conference called “Water and Cities” in October, as a follow up to a conference in Leeuwarden, with the aim to help implement the urban water management policies in Europe, but also across the world.

On July 12, European environment ministers talked in Bratislava about a number of topics relating to climate change and, in particular, the Paris Agreement which is supposed to reduce carbon dioxide emissions by 2020. In addition, Slovak authorities opened a new topic for discussion – water scarcity.

Environment Minister László Sólymos warned the EU that they do not intervene globally against drought and floods, the cost to solve droughts might rise from €3 billion to €15 billion and to solve floods from €5 billion to €15-20 billion by 2020, the Euractiv.sk website reported.

While climate change would affect the implementation of the Agenda 2030, the ministry presented in the meeting a draft of conclusions that focuses on efficient use of water in main economic sectors via determination of correct prices, improving the allocation of water and funds, creation of supplemental infrastructure, promotion of new technologies, encouraging the saving culture and knowledge deepening, Rusnáková said.

“After further discussions in working groups, the draft would be submitted to the Council of the EU for the approval during its formal meetings held in October 2016,” Rusnáková said.

The problem of available water sources is one that is common to river basins and countries in the EU, Rusnáková said, thereby their appropriate location and handling in real time are essential requirements. However, a number of river basins allow to form such water sources only through reservoirs which significantly interfere the environment, she said.

“Natural water retention measures are important for the stability of ecosystems and the protection of biodiversity,” Rusnáková said, “but they are not sources which would supply industry, agriculture and population in times of drought.”

As a member of the EU, Slovakia had to align legislation on water policy and the government approved the amendment on the Water Act and the Flood Protection Act in June.

The amendment instructs consumers who withdraw groundwater in several points from one source to get the environment ministry’s approval on the final report with the calculation of quantity of water if the total amount of groundwater exceeds 15,000 cubic metres per year or 1,250 cubic metres per month.

“We relieve consumers of groundwater from wells for their personal use from payments for preparing the final report,” Sólymos said.

Other adjustments of the amendment define the concept of water flow territory and requirements to get statement of the authority from the state water administration.