While Slovak politics do not match this larger model exactly, the current apolitical government certainly does and the recent collapse of Sieť is playing into the trend, while fuelling anger at politics generally. 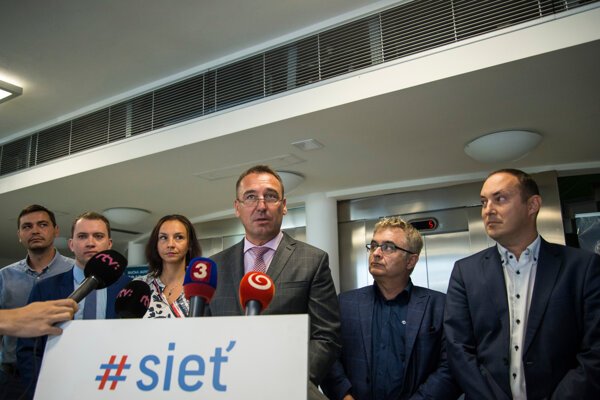 People in both Europe and the United States have grown frustrated with politics and political parties because they just don’t believe their vote makes much of a difference anymore. Over the past few decades, traditional right leaning parties have drifted left on social policies while left leaning parties drifted right on economics.

Though there are exceptions, in many Western countries no matter who won the election the government was going to be pro-business and pro-multiculturalism. People like Angela Merkel and David Cameron were okay with gay marriage, while Tony Blair and Gerhard Schroeder embraced financial capitalism. Those may or may not represent good policies, but the problem came as voters did not recall clearly endorsing that drift. In many places this has now led voters to begin rebelling against that implied consensus by supporting parties from the more extreme right and left.

While Slovak politics do not match this larger model exactly, the current apolitical government certainly does and the recent collapse of Sieť is playing into the trend, while fuelling anger at politics generally.

Slovak voters were already unhappy with their political options. The splintered election results from earlier this year, and support for people like Igor Matovič, Marian Kotleba and Boris Kollár – none of whom you would want to have over for your house at dinner – all show this. But so does the rise and fall of Sieť.

Sieť was at its most popular when it launched in 2014 and has been in perpetual decline ever since. People were so thirsty for something new that they supported the party in opinion polls when they knew nothing about it, who the members were or what they stood for. From the scandal surrounding Radoslav Procházka’s earlier presidential campaign, to their disastrous election performance and now the defection of almost all its members to other parties, things have gotten worse ever since.

Indeed Sieť as a whole stood for nothing. The more time passed the more obvious this became and the more their support dropped. Though there were individual members who had opinions, Miroslav Beblavý comes to mind, the party and its leader did not. I interviewed Procházka last year and he would not even say how he voted on the referendum that sought to block same-sex couples from adopting children.

In other words, he was both for and against gay rights and this total lack of content is why the party barely scraped into parliament. Indeed the party’s entire existence has been a debacle, and it would be one that doesn’t matter very much but for what has occurred in the past few weeks.

Once Sieť got into government the party’s disintegration became everybody’s problem. First off, it exposed how desperate the other three parties were to form a government that they teamed up with this pack of amateurs. In other words, they were interested in power for power’s sake.

Even more serious though, as former Sieť members now simply move to another party from one day to the next they essentially demonstrate that there is almost no difference between the parties. Put differently, voters who thought they were choosing between two different options were not.

Certainly the continuation of this government is a good thing in terms of maintaining a professional face on the EU presidency for the next few months, but it plays very badly for the next few years. All signs indicate Slovak voters don’t like how they have been governed, and now the governing parties demonstrate how similar they all are in their total lack of substance.

This is likely to send people looking for alternatives, including politicians with a clear belief system and a commitment to breaking up this cozy, unpopular consensus.

For now, all Mr Kotleba and his friends have to do is sit back and watch.