Bratislava offers plenty of places for barbecue and grilling. 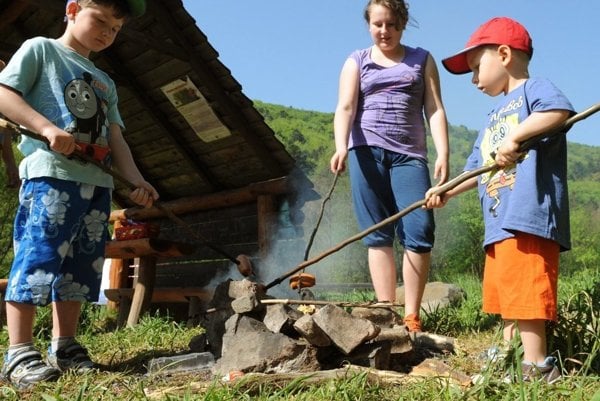 SUMMER and barbecuing are inseparable in Slovakia. Those Bratislavans with gardens can grill on their own while for others less lucky there are public fireplaces and grills. Thanks to the location of Bratislava, surrounded by forests, there are plenty of such places which are easily accessible, often also by public transport.

Official public fireplaces and grills often with wooden pavilions and wooden tables and benches are in several districts of Bratislava, for example in Petržalka near the Draždiak lakes or Líščie Údolie valley in Karlova Ves, but most of them are in Bratislava’s forest park.

Barbecue in the forest park

Bratislava is proud of its extensive green areas, Bratislava city forests, spreading above it on foothills of the Small Carpathians. Probably the most known area is Kamzík with the TV transmitter on top. Other very popular areas used by Bratislavans for recreation are Železná Studnička and Partizánska Lúka both located in Mlynská Dolina valley as well as nearby Kačín or Horáreň Krasňany.

All these places are dotted with official places for barbecuing or grilling. Some of them have been recently reconstructed and new places have been added too.

Kačín, was revitalised in 2009. Now it offers fireplaces and grills as well as shelters, tables with benches and playgrounds, informed Katarína Kohútiková from the Bratislava city council.

How to get to recreational areasin Bratislava

Koliba – accessible by bus 44 and trolleybus 203

Líščie Údolie – accessible by foot from two locations – from Iuventa or from behind the Karlova Ves municipal office, both accessible by tram

The recreation area Pod Horárňou Krasňany, best accessible from Pekná Cesta street, underwent the first phase of reconstruction in 2012. The plot of about 1.2 hectare now offers two shelters with capacity for over one hundred people, an outside grill and fireplace as well as playgrounds, according to Kohútiková.

This year a new permanent grilling site was built at the IX. Mill in Mlynská Dolina valley, while a stone double grill, Kozel, was built at nearby Drieňovské Lúky meadow last year.

“The most popular places for barbecuing are at Partizánska Lúka meadow,” Jana Znášiková from the Bratislava City Forests which administers the forest park in the capital told The Slovak Spectator.

There is a general rule that the higher you go up tourist routes and the deeper into forests, the better chance to find a free fireplace. It is also recommended to wake up earlier if you want to get a popular fireplace.

The forest company takes care of the fireplaces and grills as they regularly clean around them and empty litter-bins. But in general it is the people who use the fireplace or grill who should clean and put the place in the order.

Znášiková warned that making a fire and grilling is permitted only at marked places. It is prohibited elsewhere and people doing so can be fined.

Other popular fireplaces can be found in Líščie Údolie in the SNP Park in Karlova Ves borough as well as near the Draždiak lakes in Petržalka.

Another place for barbecuing with a shelter, tables and benches is located on a meadow near the former quarry Kamenné Srdce above Devínska Nová Ves.

What to grill or barbecue

In the past a real “opekačka” in Slovakia could not go without bacon or špekáčky – plump wurst-like meat sausages. But now Slovaks also barbecue pork, fish and vegetables.

When buying špekáčky it is recommended to pick those with the Traditional Speciality Guaranteed (TSG) label that guarantees the meat content.

Places not suitable for barbecuing

It would not be a good idea to make a fire, for example, in the Sad Janka Kráľa park in Petržalka or in other city parks as it is prohibited. So if you want to have a party in one of the city parks, take a blanket and a stuffed picnic basket. Otherwise the municipal police can fine you up to €30, said Ľubomíra Miklovičová, spokesperson of the Municipal Police in Bratislava.

Bratislava’s boroughs do not have a unified approach to having barbecues on terraces and balconies of apartment buildings. They recommend following rules adopted by the residents for their individual buildings.

“Grilling on balconies is not prohibited by law; but a suitable grill should be used and those grilling should avoid annoying neighbours with smoke,” Lucia Marcinátová from Dúbravka warns.

“The borough is against barbecuing and grilling on balconies and terraces of apartment blocks,” said Eduard Vandriak from the local municipal office, pointing out that rules of apartment buildings in this borough houses should follow anti-fire rules and directives.