The international festival of humour taking place in Kremnica by end of summer is unique in several ways. 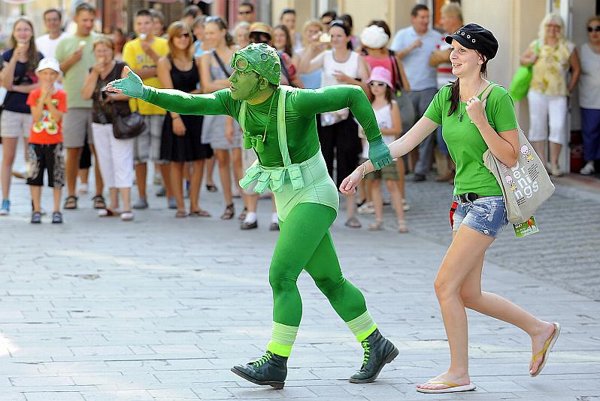 Not too many festivals have survived for so long – this will be the 36th edition – and it is also quite rare with its contents: Kremnica gags is exclusively focusing on jokes, humour and irony, in all forms and genres. This year, the countries participating will be mostly Slovakia and its neighbours – the Czech Republic,  Hungary, Poland, Ukraine, but also Bulgaria will be present, and a Swiss/Israeli duo to present a circus comedy and a Spanish/Belgian duo to show acrobatic disco version.

The genres will be probably even more varied than the nations participating: between August 26 and 28, the festival will bring, including accompanying events, two exhibitions of caricatures (including one thematic revolving around beer) and an improvised drawing, concerts, a musical-movement show, cabaret, several theatre performances (mostly in Slovak and Czech language, but maybe some will not require much language skills), circus, humorous acrobatic show, a disco fusing Balkan and Gypsy music with cumbia and reggae, slapstick comedy show of firemen, and much more.

A permanent part of the festival is also the Museum of Kitsch.

The quite serious Academy of Humour has already announced nominations for the Golden Gander awards that will be passed to laureates in the culmination of the festival.