So far two systems have been installed, more are planned. 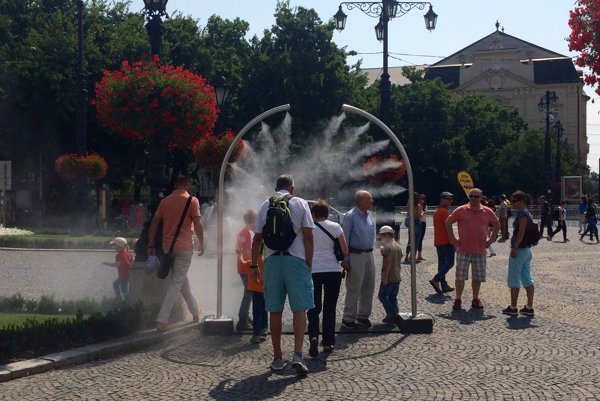 Even though the summer has entered its second half and it is questionable how long we will enjoy hot summer days, the Bratislava city council is continuing in installation of various refreshment systems. After new drinking fountains were officially launched in early August, the city’s water utility company has installed misting systems in the city centre. For now they are in trial operation.

The project is one of the publicly beneficial activities of the water utility Bratislavská Vodárenská Spoločnosť (BVS) in cooperation with the Bratislava City council. This summer BVS has already installed three drinking fountains in the Old Town, increasing the number of functional drinking fountains to 12.

“The [misting] system works on the principle of atomisation of water into microparticles of water mist,” BVS general director Zsolt Lukáč explained in a press release.

The systems will be in operation daily during summer months from 10:00 until 20:00.

After successful operation of the systems on the Hviezdoslavovo and Main squares, BVS plans to install the misting systems also on other highly visited places in the city. In total it wants to install nine systems.

When selecting places to install the misting system, BVS takes into consideration accessibility to water and electricity.

“This is why we are selecting especially localities at which there are already classical fountains,” said Bratislava Mayor Ivo Nesrovnal.