A robotic sailboat will try to cross the Atlantic

The boat will set off from Newfoundland in Canada towards Ireland. 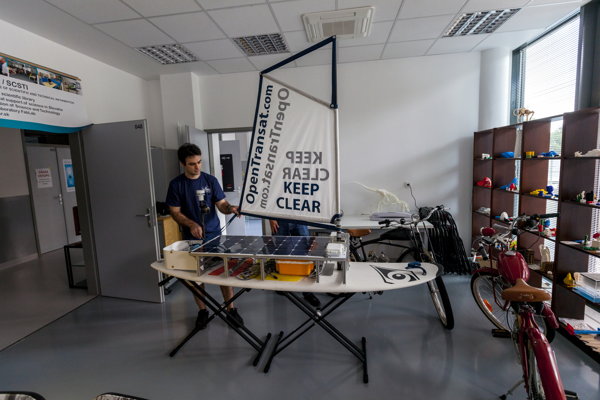 The first ever Slovak robotic sailing boat, constructed by physicist Andrej Osuský, will attempt to become the first robotic boat of its kind to cross the Atlantic Ocean.

The tiny boat will set off from the Canadian island of Newfoundland towards Ireland by the end of August. If the attempt is successful, the boat will become the first unmanned sailing vessel ever to cross the Atlantic, the TASR newswire reported.

Theoretical physicist Osuský started working on robotic boats when he lived in the Canary Islands.

“At first I wanted to build a motorboat, but then I opted for a sailing boat, which has better odds of crossing the ocean,” said Osuský, who began building the vessel in February 2016, as quoted by TASR.

The base of the sailing boat is made up of a wide surfboard with an aluminium frame attached to it.

“The whole bottom of the surfboard is covered with a metal plate in order to prevent it from breaking, Osuský explained. “The sail is made of a material from which parachutes and tents are produced.”

The sail was sewn by his mother, he added.

There will also be a video camera on the boat that will record 30 seconds of footage every hour.

“The camera has higher power consumption than the boat itself,” said Osuský, as quoted by TASR, noting that an important feature of the boat is the solar panels that will drive all the electrical devices on board.

The journey could last between one and three months, but if everything goes smoothly, it might take only three weeks. The biggest challenges on the 3,000-kilometre journey are storms, icebergs, rust and nosy sailors, he added.

“One of the biggest dangers is curious captains that have fished similar vessels out of the water and taken them to the nearest harbour,” Osuský said, as quoted by TASR.