Silence and darkness? Some are ready to pay for it

The darkness is a scary, mysterious, calming place. It attracts people so much that some go there for a holiday. 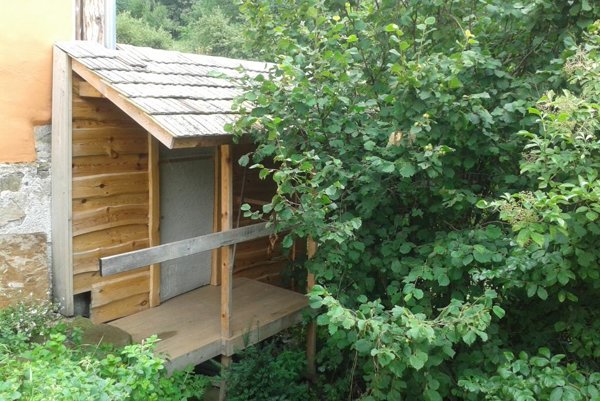 The door to a small wooden house which can contain a bed, a table, a cupboard and a sink at most, is covered with a carpet. It looks uninhabited, there is silence all around and one can only hear the leaves in the wind. But someone is staying there. The holidaymaker has been sitting inside, in silence and darkness, for several days now.

From the moment when he booked the stay he had to wait for some months to be surrounded by complete blackness. People in Slovakia are interested in this types of dark retreats. At the end of July, the dates were fully booked by April next year in Zaježová.

“The darkness leads you where you need to go. There’s no way to say whether one thing or another will happen inside, it’s individual,” Roman Miesler, the guide for those staying in darkness, explains. He talks about getting to know ones’ self, which he admits might sound like a cliché, but the person who experiences isolation gets to know what it means.

Darkness as a technique to self-knowledge is widespread in the Buddhist community of Tibet. Also Hindu used to close themselves up in the caves under the Himalayas for several months. In early Christianity there were the catacombs with places created for spiritual development. Indians in South America still use darkness as part of the training of shamans.

In the former Czechoslovakia, the Czech psychologist and therapist Alois Urbiš promoted darkness. He alone spent 50 days in such a place. He uses it as a therapeutic tool that he claims helps heal several difficulties. It regenerates the psyche, repairs metabolism, it prevents burn-out syndrome and helps increase the resistance of the body. Urbiš performs the therapy in Čeledná na Morave.

The retreat in the darkness in Zaježová near Zvolen has been open since 2013. It is located near the education centre that was founded by the civic association Živica, as a small adjacent building to the tearoom.

A similar stay is available also near Zbehová, in the vicinity of Trenčín. The retreat cabin has been built there by a community that is tied with the Buddhist teaching of Dzogchen.

From boredom to oneself

The man, who is only separated from the tearoom by a wall, has already forgotten the world outside and is doing well. Miesler was able to see him a while ago, and spent about half an hour inside.

He says it is the first time for the man. He came to relax, but he was also attracted by spiritual experiences.

The darkness means the absence of input from the outside, which encourages the person to search for resources within. That however takes several days, that is why it is recommended to spend at least one week in the house.

“The deepest spiritual potential is not in the church or in any special meditation techniques, we’ve got it within ourselves,” Miesler said of the principle of living in the darkness.

He describes that it takes a while until the person lets go of everyday issues. At first they are busy with the unresolved work e-mails, an argument with the partner or the deadlines to pay bills. But with the passing time those thoughts get too much and the critical moment comes – while at the usual holiday the mind gets distracted by new inputs, there are no such things in the dark retreat. Therefore there is no other option but to turn one’s attention to oneself.

“That is the moment when one can get very bored. I often check whether the walls aren’t all bitten,” Miesler said. In most cases, however, boredom shifts into deeper thinking about oneself and that’s when the potential depression or other anxieties disappear.

“Who sits in the dark, lightens himself a dream,” wrote German writer Nelly Sachs, a Nobel Prize laureate.

In the retreat, this is true literally. The holidaymaker dreams lively dreams during the stay, long-forgotten memories come back, as well as the suppressed traumatic experiences. For an unexperienced visitor it is therefore advisable to have a guide during the stay.

Miesler’s main task is mainly to listen. Based on the state the person is in he recommends how to further work with his mind in order to get the most out of it. He comes to the house once a day upon request. He however doesn’t come always in the same time on purpose, in order for his visits not to become the point to which the visitors look forward to, and so that they can focus their attention on their own experiences.

“The retreat is a favourable and forming experience,” psychotherapist Erika Mlejnková says. She however warns that there are several risks about such stay and she wouldn’t compare it to a holiday. There might be content in the subconscious that the person might not be ready for, and the retreat in the darkness that accelerates self-knowledge, is a thus a very tough way.

“It’s like breaking a door with a club instead of trying to open them gradually and process whatever they find behind them,” she explained.

People from western Europe live a fast lifestyle and with that also their need for a greater peace grows, Mlejnková explained.

There is also the meditation retreat, about half an hour from the dark retreat in Zaježová. The house is similar to the one near the tearoom. Here, people can come out of the house, walk around, but they are also isolated. This kind of stay is mostly sought by people who meditate, who want to finish a book or a thesis, according to Miesler.

There is a lot of interest, and thus Miesler plans to open one more meditation retreat and one more dark retreat.

Holidays in isolation are also popular abroad. In Croatia, for instance, you can go on a Robinsonade. This involves the rent of an isolated house, a slightly easier way to spend time alone for those who feel anxiety about small dark places. The house is on the coast and you can go out anytime.

Retreat in a peaceful and pleasant environment leads to the better contact with oneself and deeper self-knowledge, according to Mlejnková.

“It might not be as bombastic, but it is risk-free,” she said.