With the start of the new school year nearing on September 5, unsatisfied teachers may prepare a new protest strike. 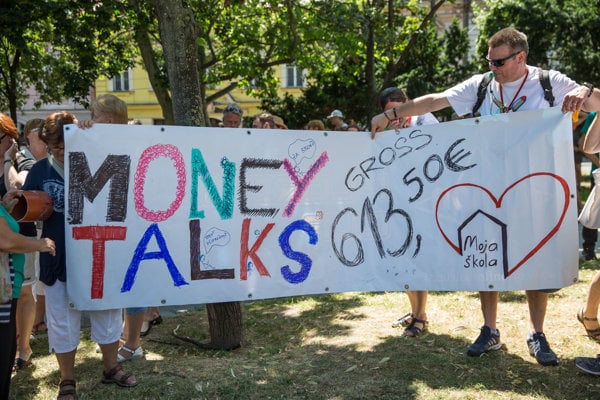 Teachers salaries will become a more pressing issue again after the start of the new year. Even after the new government took over and new Education Minister Peter Plavčan presented a set of measures to improve the conditions for teachers at Slovak schools, teachers remain unsatisfied and are preparing yet more protest actions.

Teachers are unhappy with the amount of funds allocated to the sector in the draft state budget for next year and the Initiative of Slovak Teachers (ISU) organisation that enjoys strong support mainly in Bratislava has already announced what it calls a "graded strike" to start in September, the Pravda daily reported.

The strike should commence on September 13 and classes will then be gradually shortened.

The biggest school trade union, however, still believes that the strike will not be held, according to Pravda. It still insists on a 25-percent raise, which should mean €150-300 more on a monthly basis for teachers. The ministries of education and finance, however, are currently in talks regarding only about a 6-percent hike, which would bring teachers only €36-70 a month.

ISU demands a €140 increase in yearly salaries for all educators this year and an additional €400 million in funding to cover the basic needs of the education sector. They also organised a protest march through Bratislava city centre to that end on July 1, the day when Slovakia’s EU presidency started.

Despite protests and also a general strike which took place in the beginning of 2016, significantly changing the course of the pre-election campaign, teachers have not seen their demands met.

The salaries in education between the years 2016-2020 will increase by a total of 31.3 percent, on which altogether €1.084 billion will be allocated from the state budget, according to the Education Ministry’s statement provided to The Slovak Spectator.

Meanwhile, Parliament Speaker Andrej Danko (SNS) and representatives of the Slovak Workers in Education and Science Trade Union (OZPSaV) met Wednesday to discuss the current situation at all levels of education in Slovakia, the TASR newswire reported.

OZPSaV chairman Pavel Ondek said he informed Danko about the most serious problems of workers in the education system and their demands for enhancing the level of education and science in Slovakia.

"I've pointed out the extremely low salary of a young teacher. I've presented possibilities to resolve it via changes to classification of salaries as well as our demands to annually increase the share of GDP reserved for education that would not only help to hike teachers' salaries but to improve equipment of our schools as well," added Ondek.