The village of Baláže was entered into the Slovak Book of Records in a traditional competition - sawing wood. 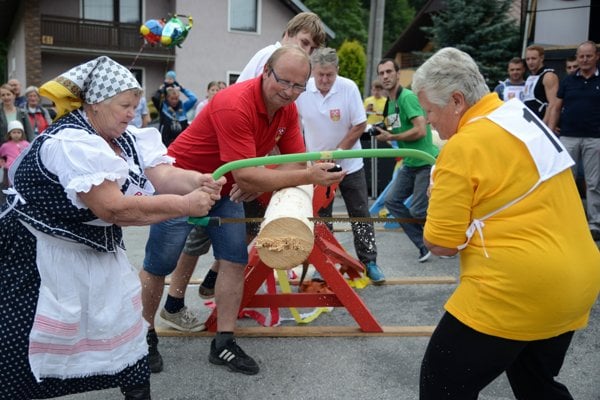 Inhabitants of Baláže in the Banská Bystrica Region celebrated the tenth year in a row of Village Day. An inseparable part of the event, which was opened by mayor Jozef Chaban, was the competition in sawing wood.

“First female teams grappled with the wood,” the Municipal Office (MO) told the TASR newswire. “They sawed meter long softwood with a diameter of 15 centimetres by sash-saw.”

Among female competitors from cities and villages from central Slovakia  - Baláže, Selce, Zvolen and Čadca - the best were Želmíra Patrášová and Anna Strečková from Selce who reached a time of 17.91 seconds, according to MO.

Men from Baláže, Podkonice, Priechod and Banská Bystrica used a two-handed saw, which is called also “bruchačka,” from the Slovak word “belly” because the saw is worked with at the level of the stomach. Male competitors sawed meter long wood with a diameter of 25 centimetres.

“The winners of the tenth year of the competition were Ján Majerík and Ján Krnáč from Priechod. They sawed up the wood in an incredible 16.31 seconds," MO informed TASR. 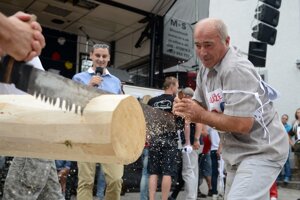 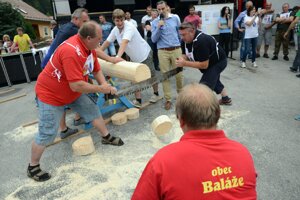 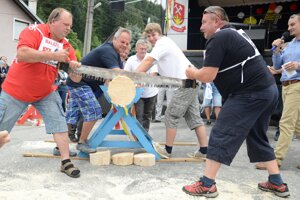 One of the winning prizes was a sightseeing helicopter flight.

The competition of the sawing wood was special this year because Baláže applied for entry into the Slovak Book of Records. They officially registered their request and it was overseen by the Commissioner of the Slovak Records.

All conditions were accomplished and the winning teams of women and men contributed to new entries in the Slovak Book of Records - the fastest sawers.

Certificates for the Slovak Book of Records were given to the mayor of the village by Janka Nékyová, the most skilled Slovak confectioner in the production of tarts.