British ambassador to Slovakia talks about Brexit, Slovakia’s presidency over EU Council and his love for football. 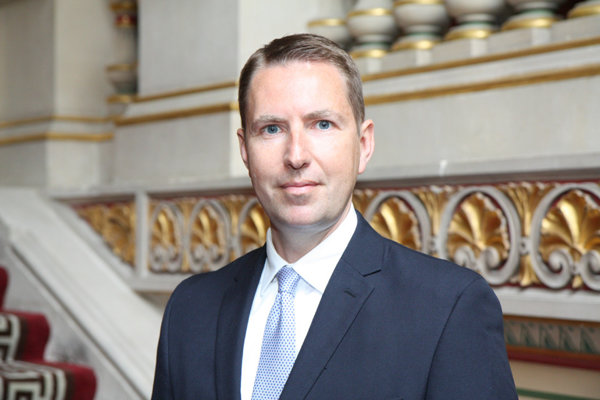 The United Kingdom and the entire European Union are living through the pre-Brexit times that are full of uncertainty, but British Ambassador to Slovakia Andrew Garth prefers to call them interesting times. The UK is leaving the EU, but not Europe, he insists. The Slovak Spectator spoke to Garth in July, a day after Theresa May was appointed UK prime minister.

The Slovak Spectator (TSS): With the arrival of the new prime minister it is now clear that Brexit will happen.
Andrew Garth (AG): Yes, the vote was clear and people of the UK voted to leave the EU. Prime Minister Theresa May has been clear as well: Brexit means Brexit, which means we now get on with extracting ourselves from the EU.

TSS: How was the day after the referendum for you?
AG: I was awake early, waiting to see what the result was. I decided to try and get a few hours of sleep, so I went to bed just as the polling had closed, where then the exit poll was suggesting it was going to be a remain vote. And then I got up in the early hours of the morning and of course it looked very very different. So on Friday lots of people were surprised and pretty tired. And then, as a civil servant and official, it was about the question what happens next. We had to deal with different mindset, which was to be leaving the EU and what that means.

TSS: What were the responses you heard among Brits living in Slovakia to the results of the referendum?
AG: Like any Brits, there’s mainly uncertainty about their life. Many that we spoke to are very happy living in Slovakia, like Slovaks living in the UK. Many of them have jobs, family, children at school. So families in both countries want certainty and that is what they’re looking for. Until we leave, we cannot give that certainty. We’re not looking to change the current arrangements, but obviously the arrangements for after we leave have still got to be negotiated. We have lots of British people living overseas and in European countries and they have rights. So we hope that a deal can be done that will protect the rights of EU nationals in the UK and also UK nationals in the EU.

TSS: One of the main concerns we hear among Brits in Slovakia is whether they will have to join the “third country nationals” queue at the Foreigner’s Police?
AG: These practical things are important and I understand. But it’s very early yet, and this will come down to negotiations and then how the Slovak government wants to approach it. The Slovak government is very keen to attract foreign investment, including British investment, and therefore making it easier for people to come to Slovakia. With Jaguar Land Rover coming in, there will be British nationals coming as well. But that will be a matter for the Slovak government.

TSS: So what is your message for the thousands of Slovak citizens who are currently living and working in Britain? Should they worry?
AG: For now, the situation is clear. The UK remains in the EU, we are in the EU until the final agreement on our departure. That’s all I can say for now. But I know the new government is determined to deal with these questions as early as possible. So I’m sure it’s one of the top issues that have to be discussed between European leaders, so that we can give certainty to people and secondly certainty for businesses as well.

TSS: One of the issues that caught attention of Slovaks after the vote was the rise of anti-foreigner feelings. There have been suggestions this might have been legitimised or encouraged by the result of the referendum to some extent.
AG: Britain has a proud history of multiculturalism. The prime minister had been quite clear to condemn those actions of a small minority in our country. After the referendum this was one of the few issues where the opposition and coalition and those fighting for Brexit and for remain agreed that they all condemn these isolated assaults against foreigners. And we’d all expect this to decline. We have lots of nationalities living side by side in Britain without problems.

TSS: The migration crisis is still among top issues the EU needs to deal with; it was also one of the main issues in the British referendum campaign.
AG: There’s two issues: the intra-EU migration and whether that should be controlled and the external migration, people wanting to come inside the EU. Clearly the UK had a particular problem with intra-EU migration and that is one of the reasons why people voted to leave. But despite the UK leaving the EU, we’re still in Europe and we’re still very interested in migration into the European continent as well. So we will work with our European partners on stemming the flow of illegal migration into the EU. We have our naval ships in the Mediterranean within the NATO mission. We are sticking to the commitments that we have made, we’re still going to help the EU to deal with the migration crisis. The UK will continue being active as far as stemming the flow, as well as trying to give some stability to countries like Syria so that the displaced people from conflict are able to stay as close as possible in that region and do not need to make dangerous journeys through Europe.

TSS: You are now representing the UK in a country that presides over the EU Council. Does this affect your job significantly?
AG: There’s certainly a lot more interest in Slovakia. Which is a good thing. It’s Slovakia’s first presidency and so far it’s been extremely well-organised, very professional. We have a lot more visitors, ministers coming in. For many of them it’s their first time to Slovakia. So it’s a great opportunity for Slovakia to put itself on the map. It’s a great PR opportunity, especially with the fantastic weather so far. Word of mouth is important as well. We’re already seeing record numbers of tourists coming from the UK.

TSS: We would not expect Slovakia to be very high on the list of holiday destinations for Brits.
AG: You’d be surprised, now it’s increasing. It think it was more than a 42 percent increase last year. And there are more and more direct flights from the UK. So from Košice you can fly to London, Bristol, Sheffield, from Poprad to London as well. And I think I’ve lost count of the number of cities you can fly to from Bratislava. From November there’s a Bratislava – Leeds Bradford flight, which is my home town. So more flights, more tourists, and also more opportunities for business links because those flights can contain business people too.