Ambassador of the Republic of Korea talks about the responses of Korean businesses to the potential lack of employees for automotive sector, the opening of KOTRA branch in Slovakia, and the tourism potential. 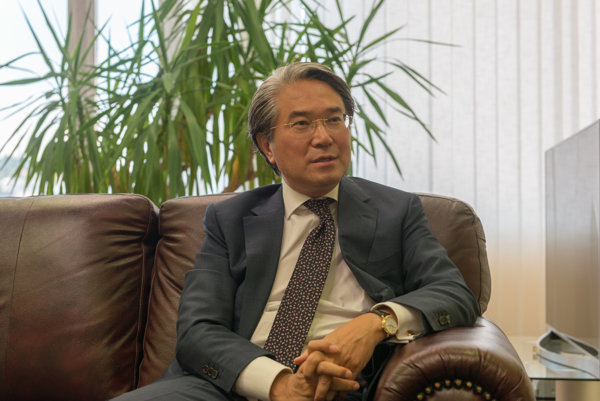 Korean companies are still interested in investing in Slovakia. Taero Lee, the ambassador of the Republic of Korea to Slovakia, sees investment potential mainly in science, innovation and infrastructure. In a written interview for The Slovak Spectator Ambassador Lee talks about his first impression of Slovakia, which is his first diplomatic post in Europe, as well as the main challenges foreign businesses face today such as a lack of a qualified labour force.

The Slovak Spectator (TSS): Slovakia now presides over the EU Council. Has this changed your job in any way and if so, how?
Taero Lee (TL): First of all, I would like to congratulate Slovakia and its people on its first EU presidency. I have an interest in Slovakia’s important role in dealing with all issues which the EU is facing at this moment. I especially pay attention to the Slovak Presidency’s role in resolving concerns within the EU and around the world caused the by outcome of the British referendum.

TSS: Recent reports suggest that after the fourth automotive plant starts its operation in Slovakia, there might be serious problems in finding industrial employees. How do Korean businesses active in Slovakia perceive this problem?
TL: Korean companies in Slovakia have already started to experience some difficulties in recruiting qualified employees. They have also expressed concern that once Jaguar Land Rover starts the production of autos in Nitra region, the lack of labour would be more severe. Foreign companies, including those from Korea, hope that the Slovak government will introduce more fundamental measures to tackle this problem.

TSS: What obstacles do Korean investors see in the Slovak business environment? Where do you see room for improvement?
TL: Korean investors generally perceive Slovakia’s business environment positively. However, easing of the tax burden, improvement of transport infrastructure and reducing administrative and regulatory barriers would be helpful in order to attract continuous foreign investment to Slovakia. Foreign investors consider the government’s plan to reduce the corporate tax from 22 to 21 percent to be a positive measure improving the business and investment environment in Slovakia and they would welcome additional corporate tax cuts in the future.

TSS: The Korea Trade-Investment Promotion Agency (KOTRA) opened its office in Bratislava last December. What does this mean for mutual trade and investments?
TL: Trade and investment volumes between Korea and Slovakia have dramatically increased since Korea established diplomatic ties with Slovakia in 1993. The establishment of KOTRA’s office in Bratislava will contribute to expanding the scope of our partnership, mainly focused now on automobiles and electronics, into new areas such as IT, medicine, food, and start-up businesses. In addition to this, the KOTRA office functions as a catalyst for the entry of Slovak companies into the Korean market. In this regard, consultation between the KOTRA office and the Slovak Business Agency is under way for Slovak startups’ entry into Korea and partnerships between the two countries’ startups.