Shock in the monastery

The Benedictine monastery in Hronský Beňadik lies very close to Slovenská Brána, a sort of canyon through which the Hron river leaves the Žiarska Dolina valley and flows further to the Danubian lowland. 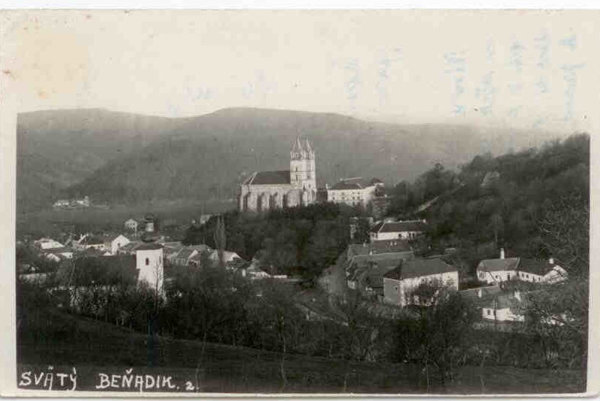 The river cannot be seen in the postcard but given the landscape with the monastery on the hill, everyone can guess that this is a very nice location.

This postcard was sent in 1930 – i.e. 12 years after Slovakia ceased to be part of the Austro-Hungarian Empire but the text on the opposite side seems to suggest that nothing has changed. It implies multiculturalism that was so typical for the empire. The addressee was a young lady with a Slovak name – written, however, with Hungarian spelling. To comply with the law on personal data, we can amend the name a bit and write a similar one: Moncsi Baranovitsová. Next to the date there is the name Szt. Benedek, which is the Hungarian version of the name of Svätý Beňadik, i.e. Saint Benedict. And the sender is a Czech who praises the fact that he understood everything in Beňadik, and did not even need an interpreter.

The monastery in Svätý Beňadik began to be built some time between 1064 and 1074, at the initiative of count Gejza, a relative of the royal family who was at that time the lord of the Nitra and Bihar counties. It is quite possible that Gejza’s motivation was to counteract the influence of the famous monastery in the Transdanubian Pannonhalma which was controlled by the Hungarian King Solomon, and thus to acquire greater independence.

Ups and downs in the past

Probably the most important abbot of the monastery was Siegfried who started to be active in Beňadik in 1330. Before he took the position, he spent six months at the papal court, as well as being a diplomat in the king’s service. As a diplomat, he also made an unusually long trip for that time to the British king due of the case of the murder of the Hungarian king’s brother, Andrew.

Siegfried was an abbot who really cared about the state and level of the Benedictine mission in Hungary. Together with the abbot of Pannonhalma, he led the General Chapter of the Hungarian Province of Benedictines and could thus successfully intervene in the country’s events.  For example, he recovered five originally Benedictine monasteries (Mogyoród, Cluj, Bizere, Búcs and Garáb) for the Benedictine province which had gotten into the hands of secular owners.

Apart from good times, it would probably also be interesting to point also to the times when the monastery was stricken with decline. In 1508, two abbots, Gregor Thurzo of Zalavár and Nicolas (Mikuláš) of Bátovce made a visit to Beňadik, and were not enthused by what they saw. There, they found seven not impeccable monks who – according to the words of the then abbot – did not abide by basic rules of monastic life. They allegedly did not respect their abbot, ate meat without his permission and even disposed of their own property. Moreover, they were buying wine with the money they collected from believers. But the abbot himself did not come clean during the visit. According to the records, he did not look after the monastery buildings but rather after his own dwelling. Moreover, he gave meals to his friars only after it was rotten and smelly.

We do not know how the visiting abbots handled the situation but the record clearly shows it was not easy to keep a monastery in good condition.