Last but one protest in front of Bonaparte drew 300

Hackers attacked the server hosting the website of a public petition for the dismissal of Kaliňák. 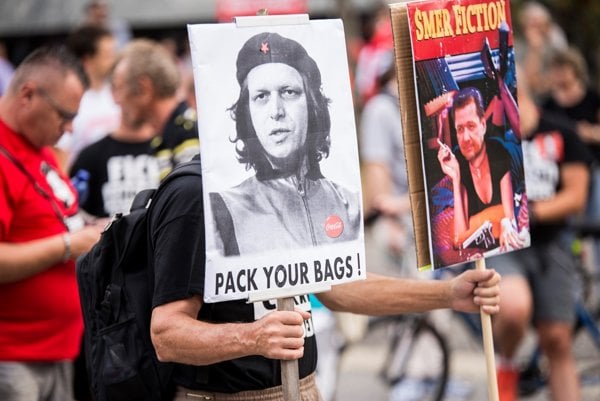 About 300 people gathered in front of the Bonaparte residential complex in Bratislava to again call both Prime Minister Robert Fico and Interior Minister Robert Kaliňák to resign. This was the last but one protest. The final one will take place on September 5.

Opposition parties SaS and Ordinary People/Independent Personalities-NOVA (OĽaNO-NOVA) have been organising rallies regularly since June 20. Apart from Bratislava the protests have also been held in other towns in Slovakia. This time the opposition also organised a protest in Banská Bystrica.

During the rally Martin Poliačik from SaS praised those attending the rallies for their stamina and for the fact that they attended rallies through the whole summer.

“We were told that after three would it would be over,” said Poliačik as cited by the TASR newswire. “Despite this you keep coming and if you have been coming here it is because it is worth it.”

Poliačik believes that Kaliňák will step down in the end “thanks to you, decent people, who arrived here today because you want to live in a decent country”. 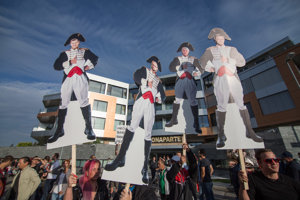 Prime Minister Robert Fico lives in a private flat rented in the Bonaparte residential complex. The Bonaparte complex belongs to businessman Ladislav Bašternák, who is suspected of tax fraud. Opposition parties SaS and OĽaNO-NOVA allege that Kaliňák provided cover for Basternák when he was being investigated by police.

The server hosting the website of a public petition for the dismissal of Interior Minister Robert Kaliňák was attacked by hackers on the afternoon of August 28 and early on August 29, OĽaNO-NOVA party spokesman Dano Mitas told TASR.

Mitas reported that thousands and at times even tens of thousands of IP addresses attacked the server on Sunday with the aim of making it inaccessible.

“After a team of experts managed to drive off the attack in the evening, thereby keeping the website in operation, another, even more sophisticated attack came early this morning,” said Mitas.