As part of preparations for the Bratislava summit, Merkel visited Italy, Estonia and the Czech Republic during last week. 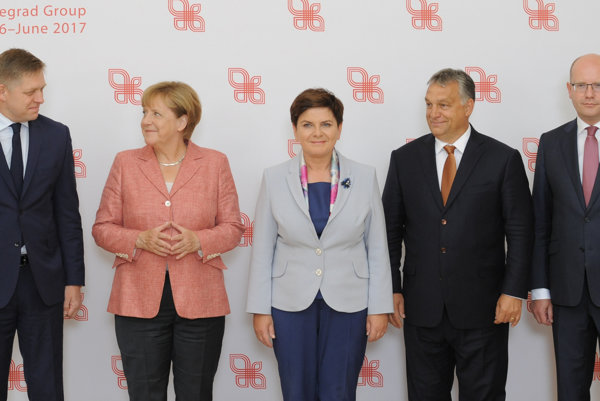 The main issues to be discussed at the informal EU summit in Bratislava in mid-September will be migration and its economic dimension and the EU’s future following Brexit. Slovak Prime Minister Robert Fico spoke at talks in Warsaw on August 26 featuring the prime ministers of the Visegrad Four (V4) countries (the Czech Republic, Hungary, Poland and Slovakia) and German Chancellor Angela Merkel.

“I originally expected that there would be an ordinary summit in Bratislava in September, but on seeing such lively diplomatic activity preceding the informal European Council meeting in Bratislava, I began to sense a huge amount of respect for the summit,” said Fico as cited by the TASR newswire. He added that Slovakia cannot afford any failures concerning the summit scheduled for September 16, otherwise it would be a very bad signal for the whole of Europe.

As part of the preparations for the Bratislava summit, Merkel visited Italy, Estonia and the Czech Republic last week.

Fico wants to raise the issue of the relationship between EU member states and European bodies at the Bratislava summit. He would like to see the EU strengthen and become a global player. The summit should serve as the beginning of a deeper debate on the community’s future.

The five chiefs of governments - Fico and Merkel plus Beata Szydlo (Poland), Bohuslav Sobotka (the Czech Republic) and Viktor Orbán (Hungary) - concurred on the need to begin a debate on raising a common European army.

The summit will also be the venue for a discussion on the current protection of Schengen borders, migration and the related humanitarian crisis. Merkel in this respect proposed deepening cooperation with Turkey and north African countries.

Concerning Brexit, Orbán in Warsaw stated that Brexit is not the cause, but the result of the current situation in Europe. He criticised the Union for not being able to deal with current problems and for not observing its own rules, such as those concerning the protection of borders and budgetary rules.

The Hungarian premier would also like to see the EU’s fundamental treaties revised. This should include the formulation of a new definition of roles for individual EU bodies. Meanwhile, Szydlo pointed to the need to highlight the benefits of EU membership, with a special accent on young people, describing the common market and security guarantees related to membership as key assets.