How not to celebrate the SNP

There had been a lot of talk about increased focus on preventing extremism when the current ruling coalition was put together. 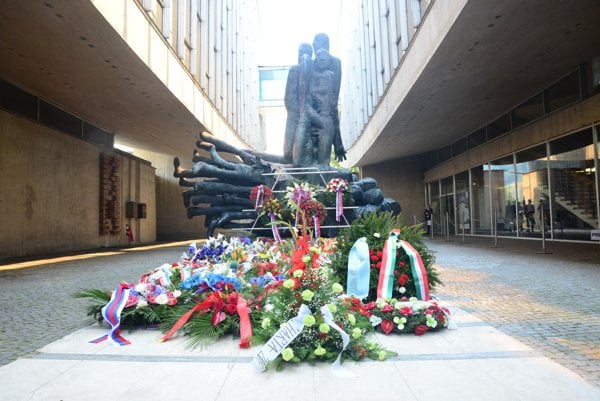 “The government will use all legal and political means to deny a chance to extremism and thus stop further anti-system erosion of parliamentary democracy,” reads the programme statement of Prime Minister Robert Fico’s current government.

There had been a lot of talk about increased focus on preventing extremism when the current ruling coalition was put together, with the programme statement going on to say it was in fact “the reason for today’s majority coalition government ... to emerge”.

In 1944, part of the nation rose up against the Nazi-allied wartime regime in what has become known as the Slovak National Uprising (SNP). Just over 70 years later, more than 200,000 Slovaks voted to elect a party to represent them in parliament that openly praises fascist ideas, glorifies the wartime Slovak state and denigrates the SNP.

For many, this was a scary moment and for some it was reason enough to believe it made the decision of Most-Híd and the now practically defunct Sieť party to join a coalition with Smer and the nationalist Slovak National Party (SNS).

Every year, top state officials gather in Banská Bystrica, the centre of the 1944 insurgency – and, ironically, the region whose citizens in 2013 elected the far-right leader Marian Kotleba as their governor. This was his first taste of public power and the first step for him and his fellow SNP-deniers towards parliament.

The gathering took place this year too. But neither Fico nor the SNS’s Andrej Danko addressed this historical paradox. The memory of the SNP has been abused for political purposes almost since it was put down by Nazi forces, and little has changed over the 70-plus years that have followed. The prime minister, just back from a dinner with Vladimir Putin, for instance took the opportunity to announce in Banská Bystrica that he would never allow antipathy in Slovak-Russian relations and complained about the hate that “some parties” have supposedly been spreading.

Danko also recently invoked God, albeit for slightly less noble purposes. If the almighty is wiling and Danko gains political power, he would cancel the TV licence fees, he said in an interview with the SITA newswire. Besides this straw-man political battle Danko, the speaker of parliament, is also dealing with issues like the eating and clothing habits of MPs and has shown interest in the post-pregnancy work-life balance of his deputy parliament speaker, who hails from the opposition.

The party also did not make a point of marking another anniversary just a few days before. Bugár seems to have forgotten that there once was a deep gap, practically a canyon, between Smer and Most-Híd: the so-called Malinová case.

SNP Day, August 29, this year is the first after a far-right party joined parliament, and was a perfect opportunity to show that this country will try to not give any more chances to extremism, and explain why extremists in parliament are incompatible with the values that we honour not just as citizens of Slovakia but also as human beings.

These are values that Most-Híd said they had to insist on in order to team up with their unlikely coalition partners. Their failure to do so in this and other cases shows their bubble of legitimacy has burst.