The leaders of the ruling parties stressed stability as they signed a new coalition deal on September 1. It cuts the number of ruling partners from four to three following the implosion of the Sieť party. In less than six months the party has lost eight of its 10 MPs and records negligible public support.

“We have not witnessed a similar situation before,” Marek Rybář from Comenius University’s school of political science told The Slovak Spectator.

The first three MPs quit shortly after Sieť joined the ruling coalition. Another group of five MPs around Andrej Hrnčiar followed in mid-August, complaining about the practices of Sieť’s leadership. Not even a recent change of leader could avert their decision to leave the party. Responding to these changes, the leaders of the remaining coalition parties – Smer, the Slovak National Party (SNS) and Most-Híd – signed a new agreement.
“Slovakia is a small country and political stability is extremely crucial,” Prime Minister Robert Fico told the press conference.

Sieť is now represented in parliament by only Alena Bašistová and ex-leader Radoslav Procházka. Both of them say they will support the ruling coalition but “will not have any important position in this coalition”, Rybář opines, adding that the caucuses of the three coalition parties have a majority.

Despite the changes, Fico stressed that the programme priorities have not changed, adding recent weeks have shown that the current coalition is capable of governing the country and holding together until 2020. There is no alternative for another government, the prime minister stated.

The coalition meanwhile started replacing Sieť nominees in state posts. Transport Minister Roman Brecely was officially removed from his post on August 31 and replaced by Árpád Érsek of Most-Híd, who had worked as deputy minister. 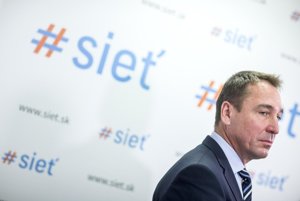 Most-Híd’s importance in the coalition increased thanks to it taking in five defectors from Sieť (Hrnčiar, Martin Fedor, Eduard Adamčík, Katarína Cséfalvayová and Igor Janckulík). It now has 15 deputies, the same as SNS.

In addition to the new transport minister, Most-Híd will nominate three new state secretaries, as deputy ministers are referred to formally. Security analyst Róbert Ondrejcsák is expected to return to the Defence Ministry, where he served during the Iveta Radičová government (2010-2012). The current head of the parliamentary agriculture committee, Gabriel Csicsai, will go to the Agriculture Ministry, while Konrád Rigó from the  Ifjú Szivek dance theatre of Hungarians living in Slovakia will take the empty post at the Culture Ministry. Érsek will be replaced by an SNS nominee.

The parties will also redistribute the posts in state firms filled by Sieť nominees. Rybář does not expect any serious obstacles during this process.

Now with just two MPs, the future of Sieť is unclear. Shortly after an August 19 coalition meeting, Fico told reporters that the party and its new chair Brecely want to “meaningfully use its potential” by joining some other party. It is however not clear which one.

SNS has already claimed it will not accept the remaining two deputies, while other coalition parties have been careful in their comments. For Most-Híd, for example, it is not a priority topic.

“For me it is important that Mr Brecely said the remaining Sieť MPs will support the ruling coalition and will fulfil the government’s manifesto,” Most-Híd leader Béla Bugár said, as quoted by the TASR newswire.

Smer has not even received any official request from Sieť MPs to join the caucus, spokeswoman Ľubica Končalová said.

“I do not know whether anybody would want them,” Rybář said, adding that the remaining deputies will not significantly change the balance of power in parliament.

Not even Sieť representatives have explained what they mean by their suggested integration with another party.

Several party members told the Denník N daily they want to wait for a meeting of the leadership in early September.

Moreover, the party is shedding voter support. Its preferences have dropped from 5.6 percent in the March 2016 general elections to around 1 percent in recent opinion polls.

Sieť may also face problems because of its debts. These include a loan from Fio Banka at nearly €3-million which it took out to pay for its election campaign. Sieť ended last year with a €2.5-million deficit, Denník N wrote.

The party may claim €3.5 million from the state budget, of which it already received €1.2 million as a contribution for votes gained in the parliamentary elections.

It will receive the rest gradually, during the whole four-year tenure in the form of contribution to its activities and based on parliamentary mandates.

The law, however, stipulates it will not be entitled for the latter two contributions if it is dissolved.

“No political party has been disbanded during the period it was entitled to receive state money,” Rybář said.

Even if it joined the caucus of another party, it might seek ways to keep both memberships and continue receiving the state money, he opines.