AeroMobil not to be for billionaires

The production should be launched in 2018. 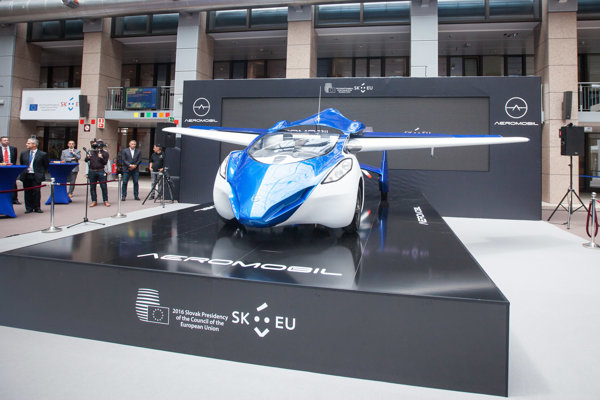 A flying car has been part of Slovakia’s presentation during its six-month presidency of the Council of the European Union during the second half of 2016. The prototype AeroMobil 3.0 was displayed in the main building of the EU Council during July, the TASR newswire reported.

The prototype, however, was not exactly the same as the model whose production will be launched in two years. Every product in the aviation industry needs to pass a strict developmental hierarchy, from pre-prototype, through prototype and zero series, to production series, explained one of the developers of the flying car, Štefan Klein.

“The new prototype is currently constructed,” Klein told TASR, “we will use some improvements from AeroMobil 3.0 in the newest model.”

The preparation team is much bigger than in the past. It is composed of people who should fulfil also the highest criteria of aviation and automotive industries, he added.

The aim is to offer a machine that will not be only “a toy for billionaires”; it should be affordable for ordinary people, said general director of AeroMobil, Juraj Vaculík.

The first series of flying cars from Slovakia should have a flying range of 1,000 kilometres. The time range is expected to be 3-3.5 hours. Though the displayed model was not the final version, it does indicate how it eventually will look.

The company is not taking pre-orders to purchasing the flying cars, though it already knows about some potential customers.

“We will formalise pre-orders and some advance payments for the first pieces next year, while the production should be launched in 2018,” Vaculík specified for TASR.

AeroMobil should be perceived as a combination of a classic car and plane that will make transport more effective, will reduce the time for long-distance journeys and avoid traffic jams, added Martin Bruncko, head of the company’s financial and strategic department.

“We have a vision to change the world,” Bruncko told TASR.

He added that the fact AeroMobil is displayed in Brussels and other cities across the glove proves that Slovakia has become more modernised and is trying to offer unique projects to the world.