The municipality close to Bratislava, Slovenský Grob, again became the centre of feasting focused on goose meet. The tradition of goose breeding and goose roasting dates back centuries. 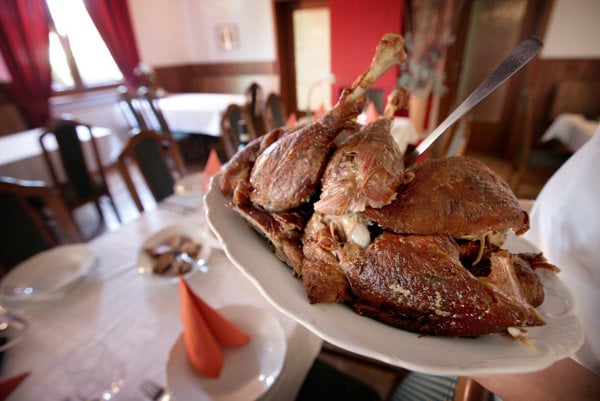 On the weekend of September 3 and 4, the village again hosted the Kráľovstvo husaciny / Kingdom of Goose Meat event.

“Goose feats are one of the tourism products in the Bratislava Region we can offer not just to locals, but also to people from other towns or from abroad,” Bratislava regional Governor Pavol Frešo said, as quoted by the SITA newswire. He added that during the event, the biggest statue of a goose in central Europe Europe – 2.8 metres tall – was unveiled in Slovenský Grob.

Mayor Štefan Gašparovič said that the history of the village dates back 800 years, and the breeding of geese and feasts connected with it have become a tradition they want to expand, improve and preserve.

The event included, apart from the meals, also a rich programme for both children and adults, including folklore, pop music, traditional products from the region, local delicacies, and more.

The beginnings of the sale of goose meat in Slovenský Grob go back to about 1896 when the farmers’ wives started to breed geese and went on to sell the surplus in Bratislava. Later, the goose meat started to be sold once a week – on Friday, SITA wrote. After it showed that ever more people came to the village to buy geese, the sale was prolonged from September till December.