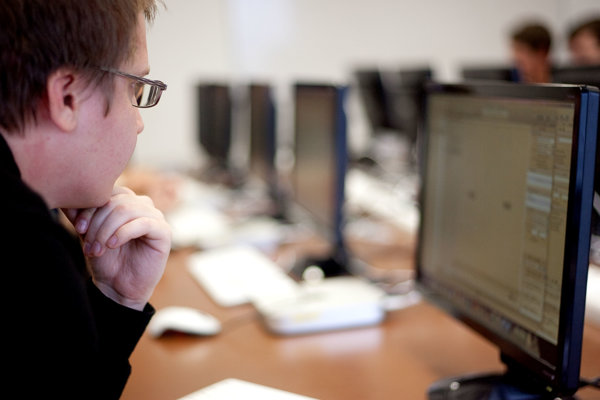 Slovak children do not search for proper information on the internet. (Source: Sme)
Font size:A-|A+10

Though computers and smartphones are a regular part of the life of Slovak children, they still lag behind in using them to search for relevant information.

State authorities and private activists should form a new education system to teach children to use the internet properly through computer games and other modern methods using information and communication technologies (ICT) on a regular basis, according to experts.

While there are now several private projects focused on such ways of teaching in Slovakia, public schools are preparing for wider application of ICT in the education process.

Computer games have not only been a popular topic, they have become a part of the culture. Thus, children are naturally motivated to educate themselves in this way, said Matej Held, the founder of Hemisféra.sk platform which operates private educational projects.

“Thanks to games we know to associate knowledge about programming, graphic and game design, cooperation and entrepreneurship to one context and come closer to the real world,” Held told The Slovak Spectator.

Using computers in the wrong way

While practice is a prime contributor to knowledge, children do not know how to use computers to experiment, find information and solve problems, Held said.

“Many children understand their computer or mobile phone as a tool of consumerism,” Held said.

Ondrej Macko, editor-in-chief of the TouchIT.sk website, pointed to the lack of IT education primarily in less developed areas where children do not have a chance even to use the internet in school or at home.

The Organisation for Economic Cooperation and Development (OECD) in 2012 asked 15-year-olds when they began to use the internet. The study pointed to the low proportion of Slovaks who had used the internet from at least six years. However, the surveyed students turned six in 2003, when the internet and smartphones were still not widespread, according to Slavomír Bača of the IT website Robime.it.

“The situation is not bad, since children should get to know the world by traditional methods such as physical toys and movement out in the fresh air,” Bača said.

On the other hand, 10-year-olds should be able to use the internet not only for gaming but also for learning, and their parents, school and friends should show them the right way, Bača said.

IT education has improved thanks to tools for digitisation and extension of the internet to schools in rural areas. Digital Education Content (DVO) is a utility for teachers which increases the attractiveness of education with visuals, linking theory with practice and complements the current printed textbooks, said Education Ministry spokeswoman Eva Koprena.

Another tool is Planet of Knowledge, which schools use for the preparation of teaching materials, during lessons and in subsequent checking of homework, Koprena said.

Macko opined that though projects like Planet of Knowledge and Learning by Playing try to introduce a quality system to schools, they often face political interference.

“Hereby the situation in the education sector improves slower than it could,” Macko told The Slovak Spectator.

Until now, approximately 59,200 teachers have been through ICT training, a great number of teachers have improved their basic ICT competence to slightly advanced, and the number of teachers who use technologies during their lessons regularly has increased, especially in mathematics, social sciences and Slovak language, according to Education Ministry statistics.

Change comes from the Concept of Informatisation and Digitisation of Education with an outlook to the year 2020 and national projects like Electronisation of Educational System of Regional Education which has introduced 5,680 interactive whiteboards and notebooks, 20,000 tablets, 1,000 Wi-Fi routers, 2,686 colour printers and 1,026 tablet classrooms to kindergartens, primary and secondary schools outside the Bratislava region.

Another project, Digital Curriculum within Reach, increases access to e-services and the ministry’s network, builds infrastructure and introduces complex services for access to digital sources and education tools, Koprena said.