Freedom of movement and security issues are areas in which Europe needs to speak with a unified voice, Slovak Speaker of Parliament Andrej Danko and Czech Parliamentary Chamber of Deputies Chairman Jan Hamáček agreed. 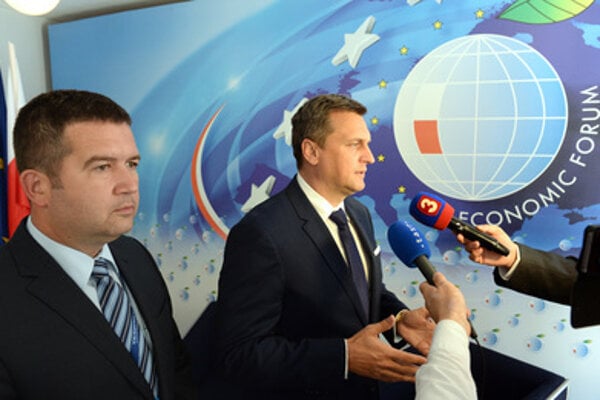 They spoke regarding a bilateral meeting in the Polish town of Krynica on September 7. Speakers and deputy speakers of parliaments of the Visegrad Four / V4 Group (Czech Republic, Hungary, Poland, Slovakia) met within the Polish year-long rotating V4 presidency in order to hold talks on the future of the EU as well as on possible economic cooperation.

“We’ve found common interests and have agreed on the need to clearly formulate the areas that help our nations, national parliaments and our states. In these areas ... the nations have to unify," said Danko, as quoted by the TASR newswire. He added that such areas are, for example, freedom of movement and the issue of security. According to him, Czechs and Slovaks have overcome historical barriers, which makes their mutual communication easier.

“I’m glad that we’ll maybe come to some joint ideas that with the initiative of Czechs, Slovaks, Hungarians and Poles will be transformed into an action which could be subsequently adopted at the informal meeting in Bratislava,” Danko said, referring to his idea to organise the informal meeting of parliamentary speakers of EU-member states to take place on October 6.

The Slovak parliamentary speaker also said that no one doubts the need for the existence of the EU: “It’s a project that can be developed in different areas, but ... we all also love our nations and our states, and we will do anything to preserve their national identity."

Talks on further economic cooperation between the countries were also on the agenda of the bilateral meeting of Danko and Hamáček. Regarding the deliberations on the TTIP contract with the USA, Hamáček said that “Slovakia, as well as the Czech Republic, are the countries that would benefit from the eventual approval of a free trade zone between the EU and the United States”.

He added that both countries could jointly persuade their western EU associates that the contract is a good idea.