The cabinet at its away-session in Poltár and Veľký Krtíš on September 7 approved an action plan for the development of these areas. 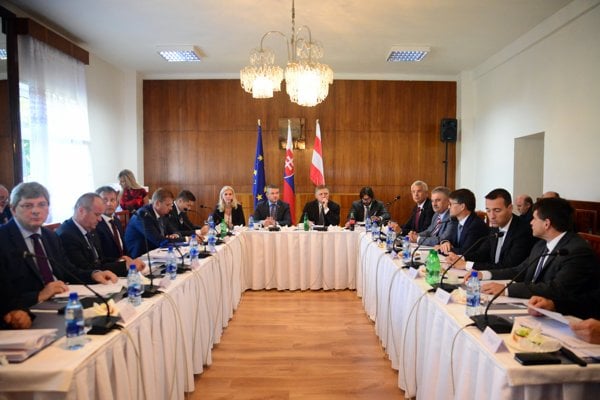 Government has an away session in Poltár on September 7. (Source: SITA)
Font size:A-|A+

The main aim of the action plan for the Poltár district (in the Banská Bystrica region of central Slovakia) is to reduce unemployment by creating 750 new jobs by 2020. Of the total financial investment of at least €98 million, €75 million would be covered by public resources and €23 million by private funding.

A local contribution worth €2.63 million would be granted as well, the Pravda daily wrote. The pivotal project to achieve this aim is to resume the production of 24-percent lead glass, i.e. crystal, at the local glassworks. A related investment should create 260 new jobs.

“We’re currently holding talks with two investors,” Poltár mayor Pavel Gavalec told the TASR newswire, without disclosing names. “We’ll see which one of them is serious about it.”

An investment plan that was announced some two years ago went awry because businessman Vladimír Poór who was granted investment stimuli worth around €6 million by the then government, did not resume operations at the glassworks.

“However, it’s still valid for the cabinet to provide support to a serious investor who is considering setting up in Poltár via an interesting investment stimulus,” Prime Minister Robert Fico said about the glassworks which stopped production six years ago. In addition to the glassworks, Fico said that the government will support any entity that invests at least €100,000 in the area in order to set up a new company, expand production or reduce the unemployment rate.

From poltár to Veľký Krtíš

Following the session in Poltár, the cabinet moved later that day to Veľky Krtíš in the same region to adopt a plan to tackle unemployment in this district as well. This particular action plan should help create 822 new jobs by 2020. Of the overall estimated financial investment for 2016-20 amounting to at least €75 million, it is expected that public funding will make €48.5 million, while €26.5 million will come from private resources. The overall amount of the regional contribution will be €3.33 million.

The action plan should help to the set up 16 companies in agriculture and six in industry, Fico told the TASR. The most promising sectors include engineering, agriculture, food industry, agro-tourism, viniculture and beekeeping. Nevertheless, there is a major problem with the poor state of roads, so the government will have to deal with this problem as well, Fico added. Apart from that, the action plan also counts on the building of two new bridges across the Ipeľ River to Hungary – in Vrbovka and Ipeľské Predmostie.