The European Union should strive to increase the certainty in taxes, finance ministers of EU members agreed on September 10, during the informal meeting (ECOFIN) in Bratislava. 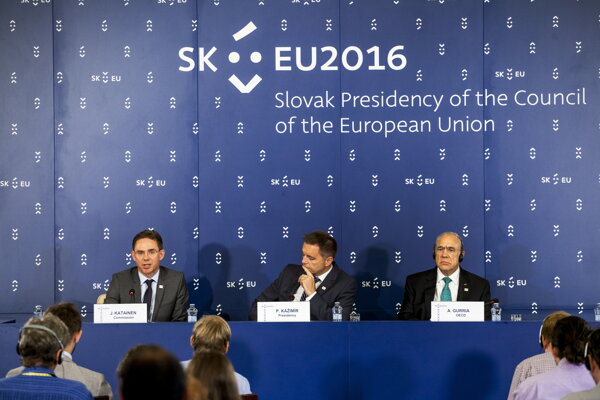 The ECOFIN event lasted for two days in total, September 9 and 10, and it focused on evaluating the first year of the Investment Plan for Europe, the fight against tax evasion and strengthening the EU’s investment activities, the SITA newswire wrote.

Increasing the tax certainty within the EU is also a crucial political issue, as it can improve the public trust, OECD head Ángel Gurría opined, adding that it is important that citizens can be assured that certainty and justice will be established. This is crucial for the trust of the public, so much undermined by the crisis.

Slovak Finance Minister Peter Kažimír, who hosted the event during Slovakia’s Presidency of the Council of the EU, stressed the importance of strict and transparent tax rules that limit the scope for tax evasion and on the other hand, give tax certainty to firms. “We did not broach the issue of tax harmonisation,” he said, as quoted by the TASR newswire. “However, the European Commission’s plan includes the issue of a common tax base. It bears some features of harmonisation but in a way that no EU member state can object to. It’s aimed at reducing the cost of tax consultation and giving an even higher rate of certainty to all those who create jobs and participate in GDP creation.”

Greater tax certainty is a relatively new but is an important issue that might strengthen the EU’s global competitiveness, according to Kažimír. “It’s of the highest importance that we make the tax system trustworthy and predictable and eliminate uncertainty and a risk of double or no taxation in this way,” minister summed up.

In order to limit the financing of terrorism and money laundering, he stressed a need to intensify cooperation between institutions at the domestic level but also to improve the international exchange of information and make it faster and more efficient.

EFSI is doing well, one year on

Investment activity in Europe is well below the level needed for the support of growth and new job creation, Kažimír also said. The European Fund for Strategic Investment (EFSI), the so-called Juncker’s package, is instrumental in this situation. It helps economies return to the pre-crisis state by mobilising additional investments also through supporting more risky innovative investment projects. “… and it works,” the Slovak minister said. “It has brought results already in the first year, in some aspects even exceeding expectations.” The ministers’ discussion was primarily focused on things that need to be improved in the investment package’s functioning in the future. “We need to improve EFSI’s focus on capital financing and ensure a higher regional balance of projects,” Kažimír summed up.

The EFSI is functioning and doing very well after one year of operation, European Commission Vice-president Jyrki Katainen opined. The fund’s goal is to mobilise investments worth €315 billion in Europe in three years, from now until 2018. “It is progressing well, as 37 percent of the EFSI’s financial capacity has already been used,” Katainen stressed. Almost 100 projects bringing infrastructure and industrial investments are underway; and almost 200 agreements on their financing have already been signed with various mediators. “In practice, this means that approximately 200,000 small and medium-sized European companies might get the funding,” said Katainen. He also said that the EC will next week propose an extension of EFSI’s functioning with minor adjustment to its rules. “Current results are encouraging and we will continue in this,” added Katainen.