Only the Portuguese ex-prime minister achieved a better result than Slovak Foreign Minister Miroslav Lajčák in the fourth unofficial ballot.

The fourth unofficial vote of the Security Council of the United Nations (UN) in respect of the post of the UN Secretary General held on September 9 placed the Slovak Minister of Foreign Affairs Miroslav Lajčák again second out of all candidates with result of 10 votes for, four against and one vote without opinion.

The Slovak Ministry of Foreign Affairs does not comment on the results as it is still an internal process within the UN Security Council. The process continues and more ballots will come, according to the ministry’s spokesman Peter Stano.

“For these reasons it would be premature to comment on the vote and results of these continuous indicative rounds,” Stano told SITA.

In the continuous voting especially important is also the number of negative votes as it indicates that the member states do not want the candidate. In addition, a major role is played also by the number of votes without opinion which suggests that the candidate is not seen negatively by anyone and may get positive votes in subsequent rounds. 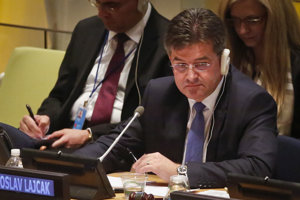 Though the results are not definitive, the latest ballot was also the last before the UN General Assembly meeting with space for lobbying of ministers, prime ministers and presidents for all candidates. Then the meeting will be followed by another round of voting, perhaps also with the power of veto. From October 2016, ballots will distinguish voting tickets of the UN Security Council’s permanent members – the UK, the People’s Republic of China, France, Russia and the United States, SITA wrote.

In general, preliminary votes do not have great importance in diplomatic circles. However, UN’s sources point to an interest to force out candidates from eastern Europe and push ahead a female candidate, although women have not placed in the top positions in the current preliminary process, the Sme daily reported.

The second term of the current UN Secretary General Pan Ki-mun is going to expire at the end of 2016, SITA reported.