Who are the last defenders of Europe?

The European dream has always been most threatened by politicians who got stuck halfway from autocracy to democracy. 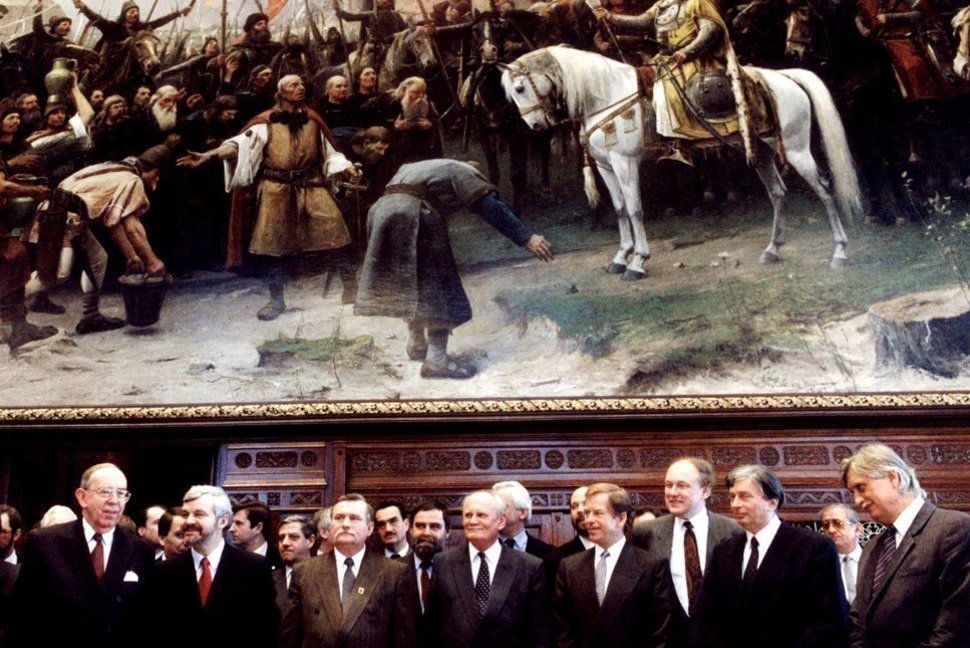 The start of the Visegrad cooperation in 1991: Presidents Lech Walesa, Árpád Göncz, and Václav Havel. (in the centre) (Source: Profimedia)
Font size:A-|A+19

We are the last warriors who really protect the dream of weak yet rich Europe from the influences of communities with stronger identities, who are coming here, driven by a desire for prosperity. We need to stay alert, or else they will outgrow us. And destroy us. Let us protect the dream that western Europe once dreamt, but now has become the privilege of central Europe. Our hearts are not made of stone, we are just being pragmatic.

This is how some leaders of the Visegrad Group describe their current position in Europe, at a time of a fundamental crisis in the European community. They refer to the Christian cultural code that unites their nations and which western Europe has forsaken, they say.

But the way these politicians rule their countries turns the European dream into a grotesque vision that even their own voters can laugh about any more. They are governed not by the European cultural code, but by the genetic code of corruption and failure to elevate public well-being above their own political interests.

These governments have first betrayed the promises they tailored for their voters, and now they are frantically working to create a new enemy, one that would appear to be a great threat. In the light of that threat, their own mistakes will not seem like minor spelling errors in the modern history of their nations.

But nobody can possibly protect values that they are not even able to define without contradictions.

We are the soldiers from the frontier castles, so you should support us, because frontiers cannot be protected with flowers or teddy bears. That was the message Hungarian Prime Minister Viktor Orbán sent to Visegrad and apparently also to the rest of Europe. Orbán, who received a Man of the Year award at the Economic Forum in Krynica, Poland, made threats that “a community with an identity stronger than ours” is coming, and will soon outgrow the European identity, because Europe has been underestimating its power. 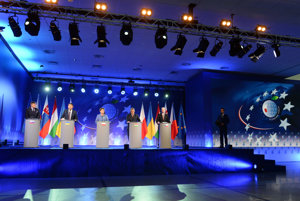 Orbán, who is facing corruption suspicions in dealings with European funds for building a railway between two villages from his childhood, does not believe that war is the reason why refugees from the Middle East are coming here.

The frontier castles that he is referring to were originally built as a line of castles that protected the territory of Hungary and the wider region from the Ottomans. In Krynica, Orbán tried to awake the sentiment from the historical era when the region faced the Ottoman threat. That parallel is just a small step away from the content of conspiracy websites that see the inflow of Syrian refugees as a new war against Europe.

Prime Minister Robert Fico has also noticed a “threat to our culture, identity, and religion”. He believes the reason for that to be the fact that Europe is weak and provides a good standard of living. People from the poorest countries desire that good living too, and therefore we “must demand order”. Otherwise we will lose everything that we have worked towards in recent years.

Polish Defence Minister Antoni Macierewicz also shares his view of the threat to Europe: questioning nation states in Brussels, questioning Christianity as a cultural code, and also, among others, devaluing the semantic value of national identity.

What is the dream they dream?

It is not exactly clear what European dream Orbán, Polish Prime Minister Beata Szydlo, or Robert Fico are referring to. It seems like the politicians who aspire to set the political tone for Visegrad have never really understood what western values are about, and that is why they have not been able to promote them in their own countries.

The European identity, that mythical European dream, is linked with solidarity. And also with the understanding that among democratic countries there is no place for a fortress that would react to global challenges only selectively.

That democracy cannot bear certain metamorphoses of power, in which the media cannot be part of their machinery of power, and that extremism dressed in the rags of Christianity is at least as dangerous as shaven-headed young men in parliament.

The European identity, that mythical European dream, is linked with solidarity.

And, not least, that security and stability cannot be a national but rather an international matter.

Providing first aid to people threatened by war is not a question of strength or weakness. It is an international commitment, part of that very identity that Fico and Orbán claim to be protecting.

Visegrad protectors from frontier castles talk about pragmatism as a political value par excellence. But it was political pragmatism that was used to excuse the big humanitarian failures of the past.

Additionally, the atmosphere of fear that the protectors of frontier castles so passionately spread, systematically kills any pragmatism in the society.

What are the real threats?

What really threatens our proverbial cultural code? A Muslim family fleeing war, or a political culture that creates a caste of untouchables who can act against any moral code whenever they please?

People who now talk about that code do not feel bound by it at all in their everyday “governance”. They are willing to flush away that code as the romantic trash of weaklings as soon as they see a chance to profit politically or otherwise.

What really threatens our proverbial cultural code? A Muslim family running from the war, or political culture that creates the caste of untouchables who can anytime act against any moral code?

What really threatens our European culture and our European dream is that politicians like Orbán and Fico have turned the countries of central Europe into their little partocratic businesses. And they are ready to use any enemy to cover their own failure to shape their countries through the real European code into self-confident nations.

The hereditary failure of political elites to cope with corruption as a form of government and to perceive their political careers as public service threatens us all. It ruins the trust of voters in our system and in democratically-elected institutions in general.

Will the Visegrad region be a nest of politicians who always get stuck somewhere in the middle of the way from autocracy to democracy, and build a third way that is most likely meant to serve as a bypass around those European values that stand in the way of their ambition?

This part of Europe will descend into the black hole of Europe once again unless influence over the region is seized by elites who carry the real European genetic code. Otherwise, whole generations will be deprived of a feeling og European identity, self-confidence, and pride.

Read more articles by the topic
This article is also related to other trending topics: Migration crisis
Close ad