Blog: Czechoslovakia is not afraid

With sweeping cinematography, the director of Anthropoid brings to life a timeless story of an unconditional love of country. 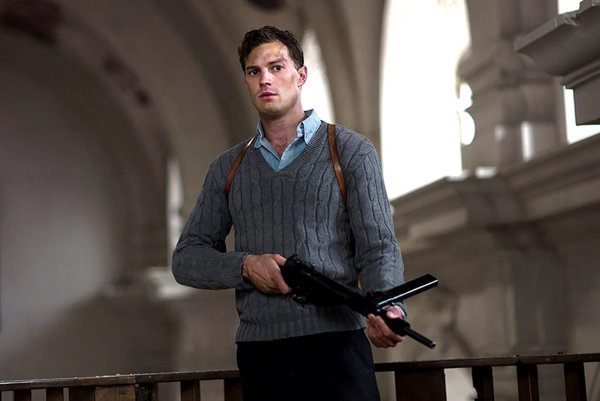 It is 1942 and Europe is caught in the biggest armed conflict in history. At the center of events stands Czechoslovakia. The country in the heart of Europe is under the iron grip of Nazi Germany. This month’s film release is Anthropoid, a World War II drama documenting the Czechoslovak assassination of Reinhard Heydrich. The architect of the Holocaust and Hitler’s right hand was shot in Prague in May 1942. It was the first ever assassination of a top ranking Nazi official.

Four years before, Czechoslovakia was blindly surrendered to Hitler in an act of concession. It was a desperate attempt to save the old continent from another war. However, the Munich Agreement, known by Czechoslovaks as the ‘Munich Betrayal’ did nothing to stop the war. In the darkest hour, a corps of British-trained Czechoslovak soldiers is parachuted deep into the Nazi territory. The team is to execute the wishes of the Czechoslovak government in exile, based in London.

The act struck at the heart of the seemingly invisible Third Reich. It was the first and, most remarkably, the last assassination of a high Nazi official, exposing a weakness of Hitler’s kingdom. Coming from the peace-loving ‘dove nation’, this film celebrates a Slovak character, Jozef Gabcik, as the leading figure. Often seen as playing a second fiddle to their more dominant brethren Czechs, here a Slovak is portrayed as leading the act of Herculean bravery. However, the film does not stop here.

In the aftermath of the Operation Anthropoid, the shocked Third Reich commanded brutal reprisals. The Nazis initiated ruthless executions of thousands of innocent Czechoslovaks. The massacre of the village of Lidice, falsely linked to the conspirators, shows the scope of merciless German revenge. All men and boys were lined up and shot, women and children were deported to camps. What remained of the town was wiped from the surface of the Earth.

Heydrich’s assassination changed the course of the War. It was only after that the Allies recognized the inevitability of war with Nazi Germany. Led by Churchill, a new uncompromising international coalition arose. The Munich Agreement was declared null and void. Europe entered into a fully-fledged war.

Two love stories unfold against the backdrop of the dramatic events, smothered by the heartless war. With sweeping cinematography, the director brings to life a timeless story of an unconditional love of country. It is the kind of love that sacrifices everything, including love of a woman.

Intricate details capture the essence of an innocent society caught in the midst of an inhumane war. Faced with the seemingly invincible Nazi regime, the brave few risked it all to save Czechoslovakia. This film celebrates the courage of the ordinary people, now forgotten by history, who took to a heroic stand against terror and fear. With no end in sight, with no guarantee of success or exit strategy. They did what they felt was right. They were prepared to give their lives away. Their actions stated loudly: ‘Czechoslovakia is not afraid’.

Today, international geopolitical tensions run high. Once again, Europe is at the heart of turmoil. The film is not to be missed. It is not to be taken lightly either. This emotional rendition of the Czechoslovak history takes the audience on an intimate journey into the hearts and minds of a people trapped. The artistry is unparalleled. The music unravels emotive knowledge. The silence of the audience at the end speaks volumes. This film will make you think, feel and most importantly reflect. Let us not forget the painful lessons of the past. Let us not repeat history again.