Investor plans to launch construction at Čulenova this autumn. 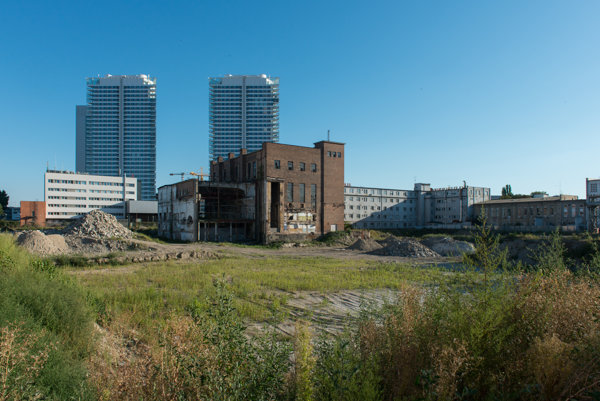 Jurkovič's turbine hall will be in teh centre of the new development. (Source: Jana Liptáková)
Font size:A-|A+13

The triangle-shaped towers of Panorama City and the office building Tower 115 near the city centre of Bratislava should soon get some new curvy companions in the form of residential towers. As preparatory works on the Zaha Hadid Architects project progress, investor Penta Investments plans to launch construction this autumn.

“Construction of the residential part of the Čulenova project will be launched immediately after obtaining the building permit,” Penta spokesman Gabriel Tóth told The Slovak Spectator.

The investor bought the four-hectare plot of land in the former industrial zone between Čulenova and Továrenská streets, close to the new building of the Slovak National Theatre and the Eurovea development in 2008. One year later it announced an international architectural competition. In 2010 the jury selected, out of more than 90 entries, a proposal by Britain’s Zaha Hadid Architects. Hadid herself died earlier this year.

“The project by Zaha Hadid was the most comprehensive and the most convincing solution of the tasks and met all the set criteria,” said Štefan Šlachta, the then chief architect of Bratislava and head of the jury. “Moreover, this is a project bringing to Bratislava a world-known name and it will get on the pages of the world architectural press.” 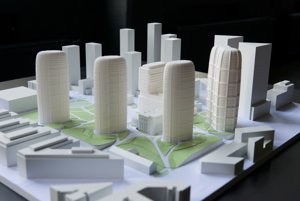 Read also:Zaha Hadid’s Bratislava project is back on Read more

The revitalised property will consist of three 31-storey residential towers, two towers with offices and a city park. Part of the project will be refurbishment of a protected historical building – the turbine hall of a heating plant designed by Dušan Jurkovič, a prominent architect known as the founder of modern Slovak architecture. The building sits on part of the land plot.

The project will include more than 700 two-, three- and four-room apartments. Penta has declined for now to reveal the prices. 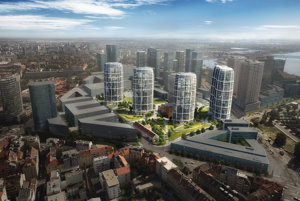 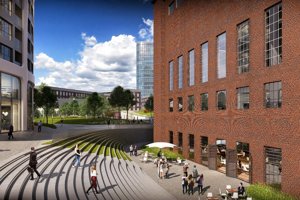 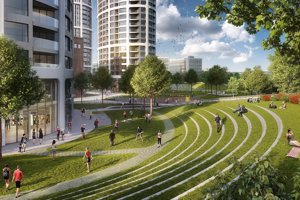 “But our intention is that living in the Čulenova project will be affordable for the higher middle segment of clients and prices will be set accordingly,” said Tóth.

The sale of apartments should be launched within weeks, and the project should get a name.

The construction of the first, residential phase of the project should be completed in late 2018. During the second phase Penta will build two administrative towers with a total rentable area of 55,000 square metres. For now, Penta has not specified when this phase will start.

The towers of the project will sit in a curved city park spread out over more than 20,000 square metres, the equivalent of three football pitches. London-based Slovak architect Igor Marko, who is devoted to planning solutions for public spaces, cooperated in designing the park.

The developer promises that the form of the park will be unique and accessible to the general public. It will include running tracks, sport fields and playgrounds for children.

Part of the first phase will also be the reconstruction of the façade of the former turbine hall by Jurkovič. The inside will be reconstructed later as it remains unclear what the space will be used for – it is said to be a non-commercial space.

“The reconstruction of the interior will depend also on the chosen usage of this national cultural monument,” said Tóth. “It is part of our intention that the heating plant serves as an active part of the surrounding park. But we cannot specify its usage for now.”

Penta will invest €250 million, out of which more than €100 million will go into the first, residential, phase.

Hadid did not visit Bratislava

While Zaha Hadid was meant to visit Bratislava, her trip apparently never materialised.

“We do not have any information that Zaha Hadid visited Bratislava during preparation of the project,” said Tóth, adding that the meetings took place in her London atelier. She was to attend the ceremony of the launch of the founding stone of the project, but she died of a heart attack on March 31 , at the age of 65.

Still, she managed to complete the concept and detail design of the whole project.

“Also after her death we continue to cooperate with her atelier, now led by Patrick Schumacher,” said Tóth.

The Slovak architectural atelier GFI is preparing the final documentation for the project. It won a competition announced by Penta to work on the Čulenova project. But the Zaha Hadid Architects firm oversees the plans and reviews whether the documentation is in harmony with the concept and the design of the project.

“Already, during the selection process we had to arrive with some solutions, either related to the landscape, forming of the façade or the size of the towers,” architect and director of GFI Pavol Franko told The Slovak Spectator.

For architects from GFI it was a challenge to transform Hadid’s ideas into an achievable form and keep costs within the budget.

“If we had an unlimited budget, we would say that it is perfectly designed,” Franko said. “But here it was very important to keep her basic idea and transform her design forms into feasible ones also from the viewpoint of construction.”

For architect Ján Ťupek from GFI this was one of the most interesting aspects of the Čulenova project.

“Zaha Hadid is perceived as an architect of iconic buildings of different kinds – galleries, museums or transportation constructions with much higher budgets. Constructions of residential character in such an environment must be interesting also from the commercial point of view,” Ťupek told The Slovak Spectator. “Thus, for us it was a challenge to search for solutions – either of design, technology or materials. Because those buildings, even though they look quite simple, are much more complex.”

GFI has been cooperating on the project with Zaha Hadid Atelier from the preparation of the architectural study up to elaboration of the final project. It also has participated in designing the park.

“Zaha Hadid prepared the basic concept and we then tuned in the project in order that it meets requirements of the city council and that the new development fits into the existing or planned urban and architectural structure,” said Franko. When Hadid died, the project was in such an advanced stage that her input was not required any more.

“Of course, it was sad news for us [about her death], but at that time even the fine lines of the project were almost definitive,” said Franko, adding that even though several visits to Bratislava were planned for her, none of them materialised. “Always in the end somebody else from her atelier arrived.”