Train and lorry collide in Veľký Meder, all passengers injured

A total of 35 people were onboard a train that collided with a lorry at a railway crossing in Veľký Meder in the Trnava Region. 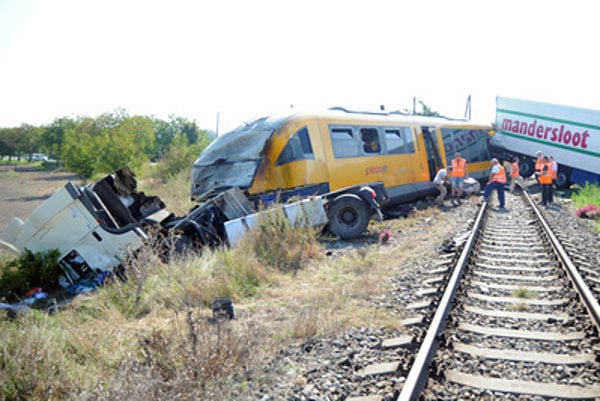 The site of the accident in Veľký Meder. (Source: SITA)
Font size:A-|A+

The lorry collided with RegioJet train REX 774 on the Komárno-Bratislava route at approximately 7:15 on September 16, prompting the RegioJet private transport company to introduce substitute bus transport for passengers. Due to the extent of the damage to the track, no trains ran for the rest of the day.

Transport Minister Arpád Érsek (coalition Most-Híd party) was quickly at the scene. “The first impression is quite bad,” he told the TASR newswire. “There were 35 people on the train. Every one of them is injured, as well as two people in the lorry. Three individuals are seriously injured.”

Fire-fighters and paramedics have been dispatched to the scene. The train driver had to be airlifted to hospital in Nové Zámky where he is in critical condition, in an induced coma. The front-seat passenger from the truck has been also gravely injured but is in stable condition, conscious and communicating. No surgery was needed for her at the University Hospital in Bratislava where she has been hospitalised. In total, 15 of 35 passengers were transported to hospitals in Dunajská Streda, Komárno, Nitra, Nove Zámky and Bratislava, the Sme daily wrote.

Accidents occur frequently at the railway crossing in question, according to the minister, although he refused to speculate as to how safety on the stretch could be improved. “That’s up to erudite experts to say, whether to lower the speed limit or build gates,” he said.

“ŽSR has immediately dispatched all resources and personnel required to clear up the debris from the collision,” Martina Pavlíková, spokesperson for rail infrastructure owner ŽSR, said as quoted by TASR. However, she could not estimate at that point when the line will re-open.

The cause of the accident is under investigation. “The railway level crossing is equipped with flashing lights and warning tones but is without gates. The warning system was fully functional and active at the time of the collision,” Pavlíková added.