Despite the drop in the number of jobless, its tempo is slowing down compared with the previous period. 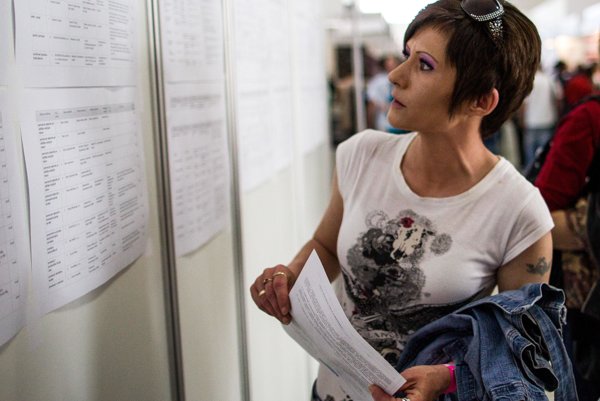 The registered unemployment rate in Slovakia stood at 9.43 percent in August, which is the lowest level since January 2009 when it accounted for 9.03 percent. Though it dropped by 1.89 percentage points compared with the previous year, in monthly terms unemployment fell by only 0.01 percentage point.

The labour offices registered altogether 256,271 people ready to take a job immediately, down by 189 people compared with July. In annual terms, the number dropped by 48,916, the SITA newswire reported.

August saw the slowest month-on-month drop in the past 1.5 years, analyst with UniCredit Bank Czech Republic and Slovakia Ľubomír Koršňák wrote in a memo. Also the annual decline is gradually slowing down, as for the first time this year the decrease amounted to less than 2 percentage points, he added.

“Similarly to previous months, the drop in the registered unemployment rate in August was slowed by administrative factors, particularly the lower number of jobseekers who participated in municipal and volunteer work, among others,” Koršňák wrote.

Their number has been dropping since March, but has intensified in the past three months, he added.

Another factor is the labour market itself. The number of new unemployed in the market every month has stabilised at 17,000, which is by 1,500-2,000 less than at the turn of the years, according to the analyst.

“The main reason for the slow-down in unemployment drop is not lower absorption of the unemployed by the labour market, but rather the increasing number of newly registered jobless,” Koršňák added.

One of the unconfirmed hypotheses explaining this development is the quality of the labour force as the state managed to reduce the number of long-term unemployed this year. Nearly one-third of those who left the registry in the first half of the year were without work for more than four years, Koršňák wrote.

Labour Minister Ján Richter (Smer) says that this is the result of restricting some tools of the active labour market policy, such as offering them a contribution for activation works.

“Regarding the job offers we can now provide jobseekers with ordinary work instead of these activities,” Richter said, as quoted by SITA.

Koršňák, however, opines that some of these unemployed took jobs only as they were afraid of being removed from the register. They may return to labour offices after some time, he added.

Richte, meanwhile, praises the development of the unemployment rate, saying that his government gradually fulfils its promise to create new jobs.

“There is a real precondition for fulfilling the task for next year which concerns 100,000 new jobs,” Richter said, as quoted by SITA.